Since March 2014, artist and Kortrijk native Joachim Coucke has been running art space DASH, one of the very few places for contemporary art in his Belgian hometown. We had a chat with him about what it’s like to operate outside of the usual art epicenters, DASH’s recently published anniversary book, and being confused with washing soap…

The word “dash” has many meanings. Which one are you referring to?

It has indeed many different meanings, which was one of the reasons why I chose it as a name for the project. What attracted me the most was its use as a punctuation mark: a dash as in connecting, bringing together. The dash is also an in-between space, and by doing shows there you place something unexpected in it and create a zone for thoughts and reflections. It’s a brand of washing soap as well, and one day I got a phone call from an old lady to complain about a promotion she didn’t receive for her bottle of washing soap! 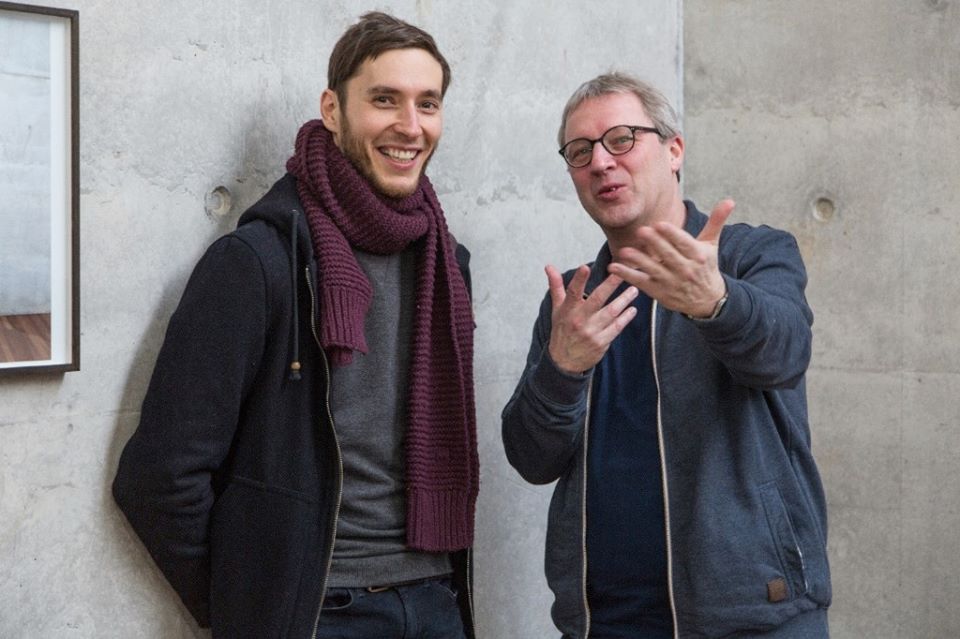 How did it all start?

DASH is part of the Kortrijk Academy, an art school for people of all ages who attend courses during their leisure time. There are different classes on offer such as painting, sculpture, or photography. There’s a large number of students but most of them are not in touch with the contemporary art scene. The director of the Academy asked me if I’d be up for organizing exhibitions and bring contemporary art to the school and its students. I found this an interesting starting point, especially because there was no obligation to be didactic. I got carte blanche and a small budget. I liked the positive intention: introducing contemporary art and sparking a discussion among students and visitors by making good exhibitions.

Do you think you succeeded with your mission?

Partly, I feel. I can see that our students are taking in a lot. For example, the way they present their works has improved a lot since they get the opportunity to witness so many new ways of using a singular space. It’s a long process but after a while it pays off. The exhibitions were mostly well-received. Some have the courage to come in and ask questions while the artist(s) are at work, and that opens up new dialogues. As many of our students are not into emerging contemporary art, it is fascinating for artists to get their feedback. It can be confronting but also very positive. Sometimes, I had tough and heated discussions with students or colleagues. For me, it’s ok to disagree with a work of art or an entire show, but the critique has to be sound. Then we can all learn from these dialogues. Through the years I got quite a thick skin and prefer to direct my energy towards positive things. And you can’t expect a blockbuster exhibition with a tiny budget! 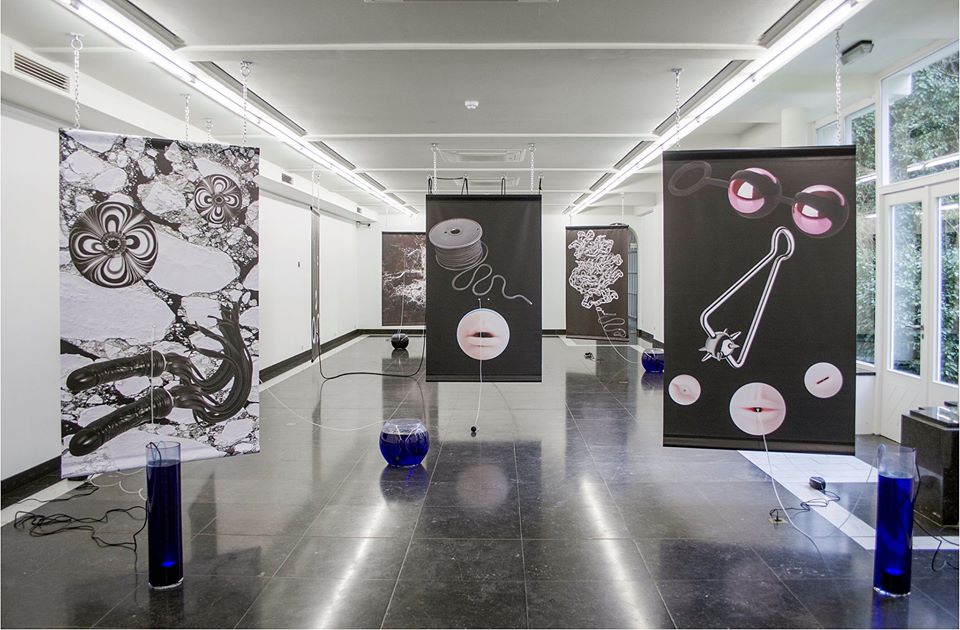 Kortrijk is not an obvious choice to run an art space. What’s it like to be situated outside of the art epicenters?

The Academy and the exhibition space, which is a very large corridor (28,5 x 9m), are located in the building that was a police station before World War II. Upstairs there’s beautiful daylight, which gives the impression of a German Kunstverein. From the start, there was an audience from the school, but in the beginning of March 2014, I made the choice to operate under the name DASH and not the Kortrijk Academy. Unfortunately, there is still some stigma attached to this type of institution as being outdated and old-fashioned (in the sense of painting flowers and drawing nude models). By calling the project DASH I created a context and an autonomous unit within a larger ecosystem. I believe that the geographic location is not that relevant anymore in times of Internet and social media. It matters for foot traffic and getting large crowds at openings and events, but we have a steadily growing audience in Belgium as well as abroad. Kortrijk is well-known for collectors of contemporary art. The audience is very diverse, which is interesting. 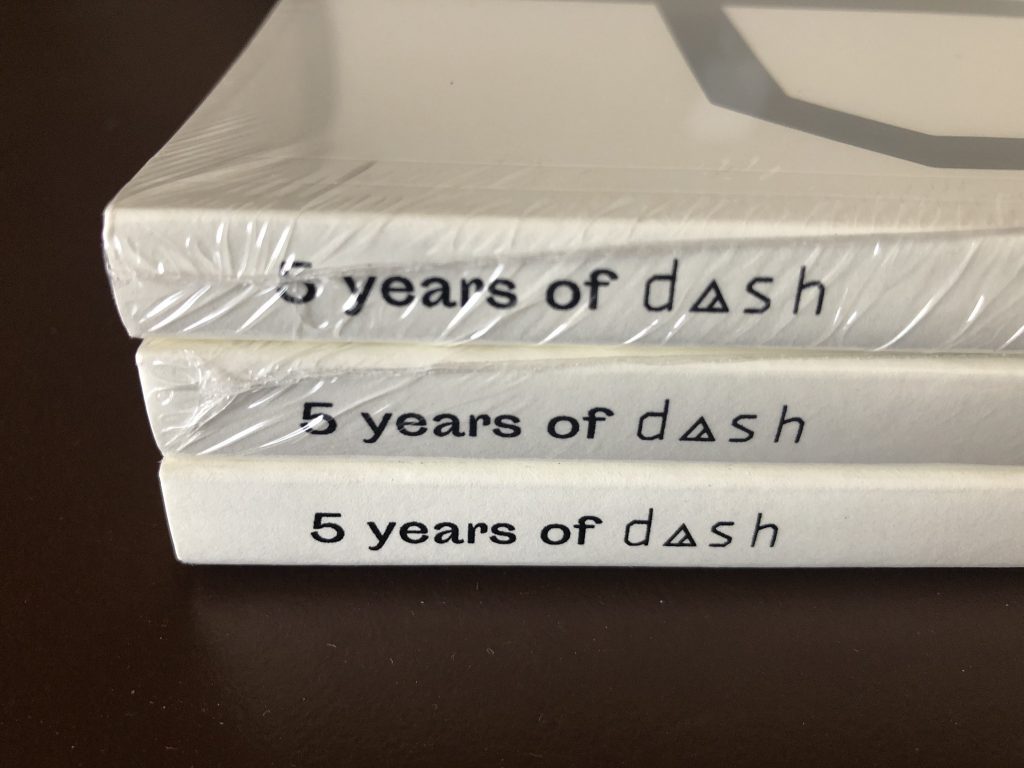 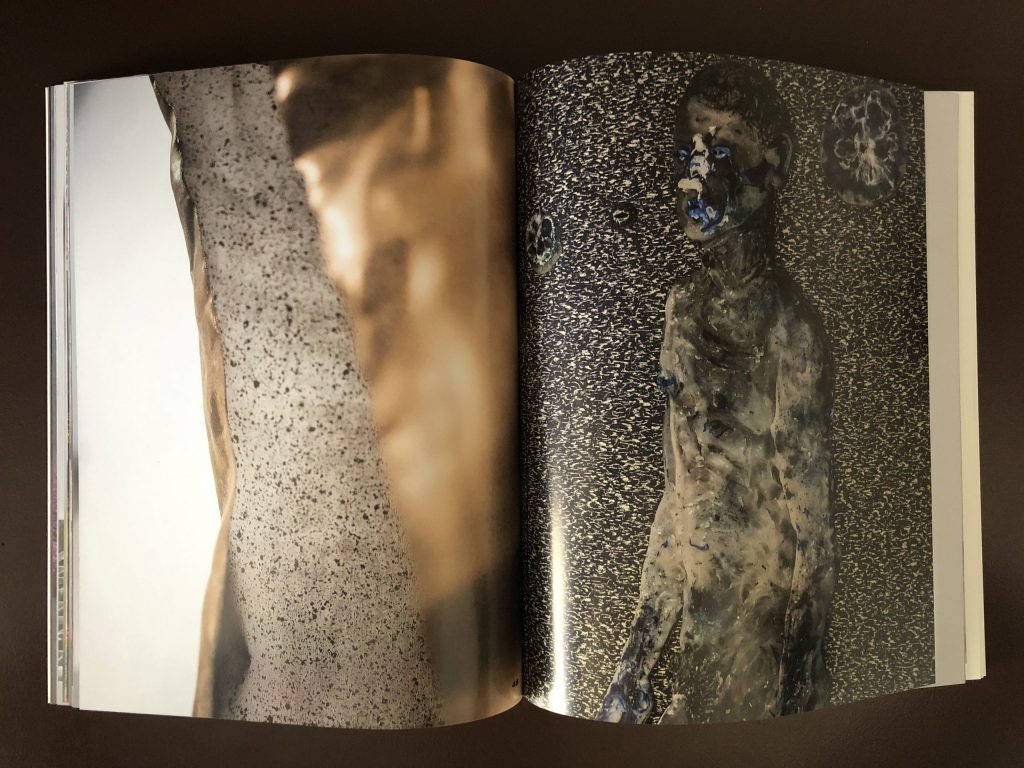 Can you tell me more about the book you recently published?

At the end of last year, we released the book “5 years of DASH”, a collaboration with Pati Petrykowska from Pony Press. It’s 136 pages strong, printed in color by Die Keure in Bruges and measures 20,5 x 25,7 cm. The cover features a handmade silkscreen print of the DASH logo. I had been looking through the digital archive of the project and noticed how many great images we had accumulated over the years, taken by the photographer Alexandra Colmenares. I wanted to do something with them. A simple overview would have been boring, so after a lot of talks we came up with the current concept of the book: the first part consists of spreads which always juxtapose two artists from different shows. All the artists we worked with are represented in the spreads at least once, and it lets you see connections between different artists and exhibitions. The second part includes a dense overview of the shows from the most recent to the opening exhibition in 2014. At the end there’s a text by SMAK’s Philippe Van Cauteren and an afterword from Petra Flamand, the director of the Academy Kortrijk. It’s a nice documentation for the art world and in a way also a learning instrument for the students.

It’s not easy to keep a project like this running. How does the financing work?

If you have to finance a project like this yourself, it’s going to be very hard – especially in the current climate in Belgium with all the government budget cuts. But as the space is free and there’s a small budget from the Academy to pay the artists and the photographer, it’s a fantastic starting point. I also have access to some facilities of the city: a van, technical equipment etc. It asks a lot but you get even more back and it’s fun to do. 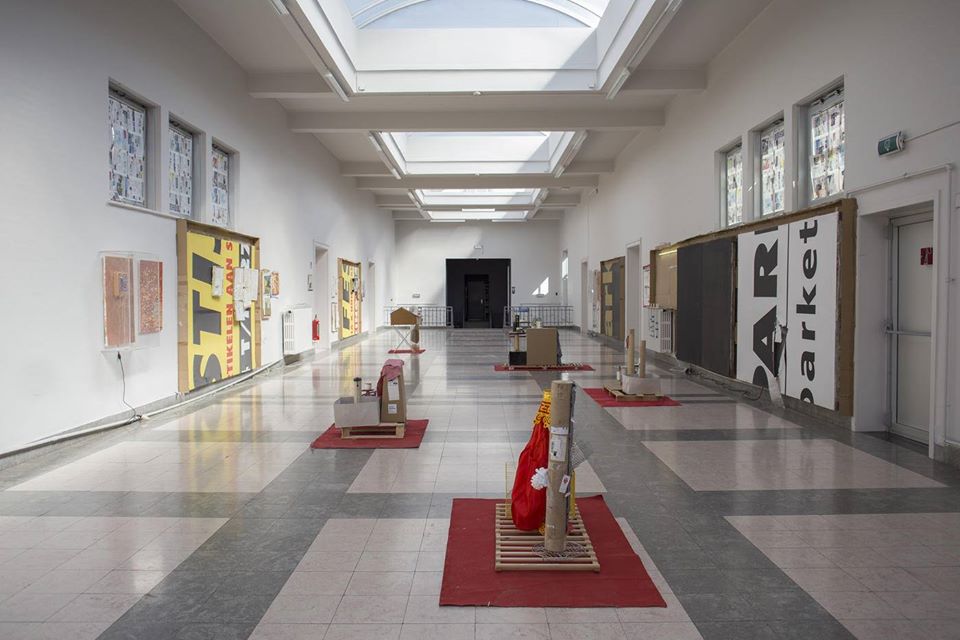 What were your favorite moments in these five years?

Probably making the book, which gave me so many flashbacks to great moments I got to share with fellow artists.

What were the biggest challenges you encountered?

When you try to do something positive and show the work of artists I strongly believe in, it’s sometimes hard when people don’t (want to) understand these choices.

You’re also an artist yourself. Does the gallery project inspire your own practice or can it also hinder it in the way that you have less studio time because of it?

During the harder stretches of this five-year run I was always fuelled by the energy fellow artists would bring to the space. And yes, finding the right balance between curating and studio time is not always easy. But after every show I notice how I’ve learned several new things about materials, how to approach a space, or about how others contextualize their practice. It’s very inspiring and adds another angle to my own practice. 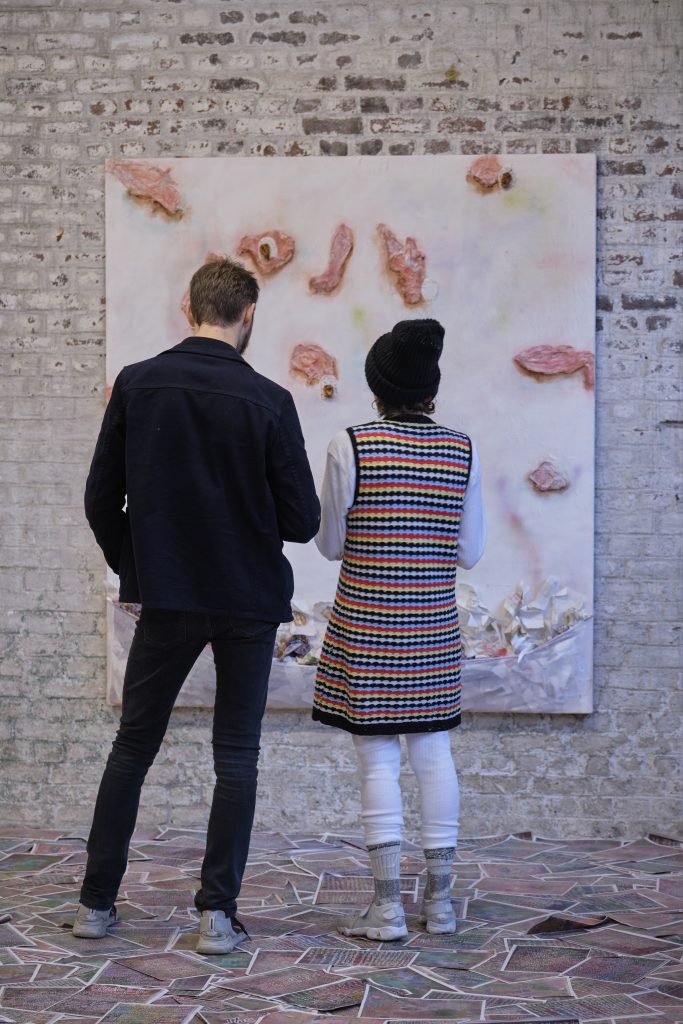 Left: Joachim Coucke, with Canadian artist Athena Papadopoulos in front of her work at Liebaert Projects

What about curating fascinates you? Is it helpful to be an artist yourself?

You can bring a certain vision or idea to life. I think many artists have awesome ideas for great shows but never dare or have the opportunity to see the project realized. That’s what DASH feels like every time. It’s a big learning curve of many things all at once. In the beginning it was very stressful but now I’m comfortable with printing the floor plan while the first visitors are already arriving! Also, it helps to be an artist as well; people tend to be more vulnerable and open with their thoughts and doubts.

What’s your curating approach? How do you work?

I like to use my gut feeling instead of approaching a curatorial project in a too theoretical way. Most of the time I have a basic idea or topic in my head and then work around it. Or I get struck by certain works from an artist and just want to see how he or she deals with the space. The space plays a role as well but nothing is impossible and good artists are always very inventive.

Do you see the art world with different eyes after this experience?

There are many versions of the art world; I try to be positive and not worry too much about it as I can’t control outside parameters. 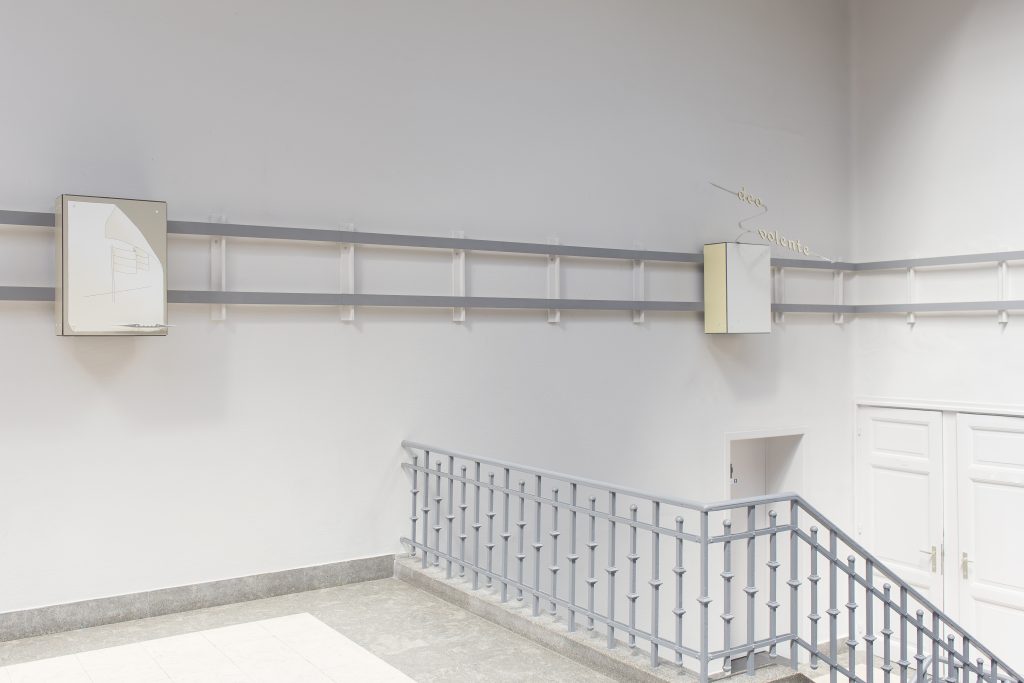 A piece that touches me, surprises me, or makes me laugh. Probably very cliché but so true! Also the match between the character of the artist and the work itself tells me a lot.

What advice do you have for those dreaming of opening up their own art space?

I can only encourage anyone to go for it! You meet so many different people, from fellow artists and curators to art enthusiasts and collectors. If you do it well it’s very beneficial for the artists, the community and even for your own practice.

What’s the situation like for you now during the lockdown? Do you already know what’s coming up next for you?

The school is of course closed right now, and it probably will be until June or even September (at worst but lets hope not). We were invited to participate in a new photo festival in Kortrijk and to host a show within this framework, but at this point I’m not sure the festival will happen. 2020 could be a lost year for DASH. What I do know is that we’ll kick off 2021 with a solo show by Dutch artist Bob Eikelboom.