The week in Belgium from 7 to 13 September

Brussels Art Days, Design September, an opening in a home gallery, an art book fair, and more. See you there!

From 11 till 13 September Brussels A new gallery season is kicking off this week, and the Brussels Art Days provide the perfect setting to properly inaugurate it, with prolonged opening times, a curated tour championing independent art spaces, and more. Check out the full programme here and discover some of our favorite openings and exhibitions this week further below.

From 10 till 30 September Brussels 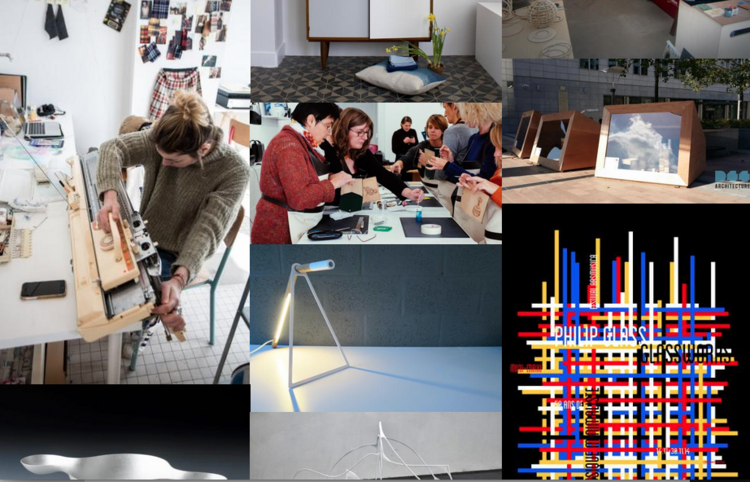 The annual design festival connects and showcases the city’s design scene by offering a multitude of events and exhibitions. The programme of this 10th anniversary edition is especially eclectic and vast, featuring no less than 100 different happenings throughout Brussels. We recommend the Arts & Crafts tour taking you behind the scenes of some of the city’s most skilled artisans, the Pop-up store at Direct Design, the exhibition at För presenting works by photographer Sasha Vernaeve and textile designer Delphine Dénéréaz. Plus, don’t miss the massive design market this weekend at Tour & Taxis! Not only the mainstream galleries open their doors again this week, but also other alternative art spaces. One of our favorites is Middlemarch, a project by two art passionates who organize exhibitions in their very own apartment. This Tuesday you can discover the work of young Brussels artist Stephan Goldrajch in this cozy setting, whose practice is fittingly linked to the intimacy of the home through a fascination with embroidery. Courtesy of The Approach

As you might have heard New Yorks’ Independent art fair is expanding to Brussels, and in this context it’s not only opened an office in the Belgian capital but is now also launching its own exhibition space. The very first show in the new space is presented by London gallery The Approach and kicks off this Friday. It will be the debut solo show of British artist John Stezaker, who has renowned awards as the Deutsche Börse Photography Prize under his belt and whose works are part of major museum collections such as the Tate or the Museum of Modern Art. Here, he shows a combination of collages and found objects, mixing material from film stills and cinematic promo material with hands from display mannequins. American artist Chris Martin (not related to the Coldplay frontman of the same name) lives and works in Brooklyn. He is mainly known for his abstract paintings which at times incorporate newspaper clippings, vinyl records, pillows, photographs or glitter. This time Martin will not only present his creations inside but also outside the gallery, for example attached to the facades of houses. Rodolphe Janssen simultaneously presents “I am a photograph”, an expo featuring works by Norwegian, LA-based photographer Torbjørn Rødland, whose captivating images are beautiful, disturbing and eerie all at the same time. This weekend both Brass and Wiels invite paper and book lovers to their respective events dedicated to the printed matter. They’re located in neighboring buildings, so do make sure to visit both! Artists Print and the Wiels art book fair both champion independent publishers and self-published artist books, offering you a vast selection of zines, books and more from Belgium, but also Germany, Sweden or Italy. Participating are, amongst others, Art Paper Editions, Triangle Books, La Villa Hermosa and Motto. A must for all book and art fans! Berlin gallery Kromus+Zink has always had a bit of a link to the Belgian art scene through representing artists from Belgium (Rinus Van de Velde, Hannelore Van Dijck, Lara Gasparotto), and for this week’s Brussels Art Days the gallery is setting up shop in Brussels, inviting you to a preview of its upcoming Berlin solo show. “Memory belongs to the stones” features the works of the young Russian shooting star Aslan Gaisumov, whose calm and powerful works oftentimes deal with the war-ridden history of his Chechen hometown Grozny.

Magazine release: The Word at Wiels After a short excursion into the world of paid magazines, The Word is back in its good old form: completely for free and with five editions per year. To celebrate its comeback you’re invited to the release party this Friday at Wiels, where you can get your hands on the freshly printed magazine and have a listen to a selection of local bands. And the paper theme continues: this weekend Bozar hosts a huge exhibition dedicated to the art of drawing with “Art on Paper”. This 5th edition of the contemporary drawing show features around twenty solo expos presented by a selection of galleries from around the world. Exhibitors include Iceland’s Hverfisgallerí, Brussels’ Alice Gallery, Paris’ Galerie Bernard Bouche, and many others. It doesn’t happen often that there’s a vacant, 3000 square meter-big building available on Brussels’ majestic Avenue Louise. Exhibition project Louise 186, named after its prominent location, makes use of this enormous, temporarily empty space with a fantastic group expo curated by Amandine Wittouck. The multifaceted show presents 20 different artists, all born or based in Belgium. Everyone received a space they can use in any way they see fit, a concept encouraging in situ works resulting in original and unique pieces. Featuring some personal favorites such as Jean-Baptiste Bernadet and Sébastien Bonin. Not to miss! This exhibition is indeed a special one for young French-born, Belgium-based artist Valérian Goalec: it’s his very first solo show. Starting on Friday, Brussels’ Stems Gallery presents a selection of paintings and sculptures by the emerging talent under the name “One to Nine”. The expo title refers to the numbers on the canvas which serve as reference points for Valérien’s signature painting technique based on random, machine-like movements. One to watch!

Music: Big Next Festival at DOK Big Next Festival has its finger on the pulse when it comes to who’ll be hot in the future. The fruitful collab by Ghent’s Democrazy and record label Big Next sees its second edition this Saturday, boasting an eclectic, carefully chosen line-up including the solo project of Vampire Weekend’s bass player, Baio, Australian three-piece Seekae blending electronic pop, post-dubstep, post-rock, house and ambient, and Man of Moon, described as the “new kings of art rock” by the Observer. Several times a year super trendy Antwerp restaurant Felix Pakhuis, especially known for its brunch and traditional Flemish dishes with a twist, organizes Dimange, a lovely Sunday food market. It takes place in the beautiful Lichtstraat, the so-called street of light. A great selection of no less than 15 food trucks and Felix Pakhuis will make sure your tastebuds are satisfied, offering everything from fine wines and gin& tonics to home-made meatballs, organic pancakes and fresh seafood. Bon appétit!