French-born, Brussels-based artist Justine Bougerol tells stories through captivating site-specific installations, often revolving around the leitmotif of the childhood home, where fiction mixes with reality. In the exhibition “Quelques lueurs” (“Some glimmers”) at Brussels’ MAAC, where she just finished a three-year residency, Bougerol delves into the different organic substances which inhabit our dreams and memories while questioning the dreamlike and contemplative potential that emerges from a material image. We spoke to her about the show, the importance of being well-surrounded, and how making art can cure nostalgia.

How did you know you wanted to become an artist? How did you find your path?

I started out studying literature, and during that time a friend of mine regularly took me to contemporary dance performances. I especially remember those by Alain Platel, Jan Lauwers, and Peeping Tom. I was so blown away by these creations, that I was set on finding a way to work in this kind of universe. That’s why I studied scenography, without having had any type of artistic practice beforehand. Very inspired by the stage universe of Peeping Tom, I asked them if I could work with them right after I finished school, and now I am responsible for some of their creations while at the same time working as a visual artist. 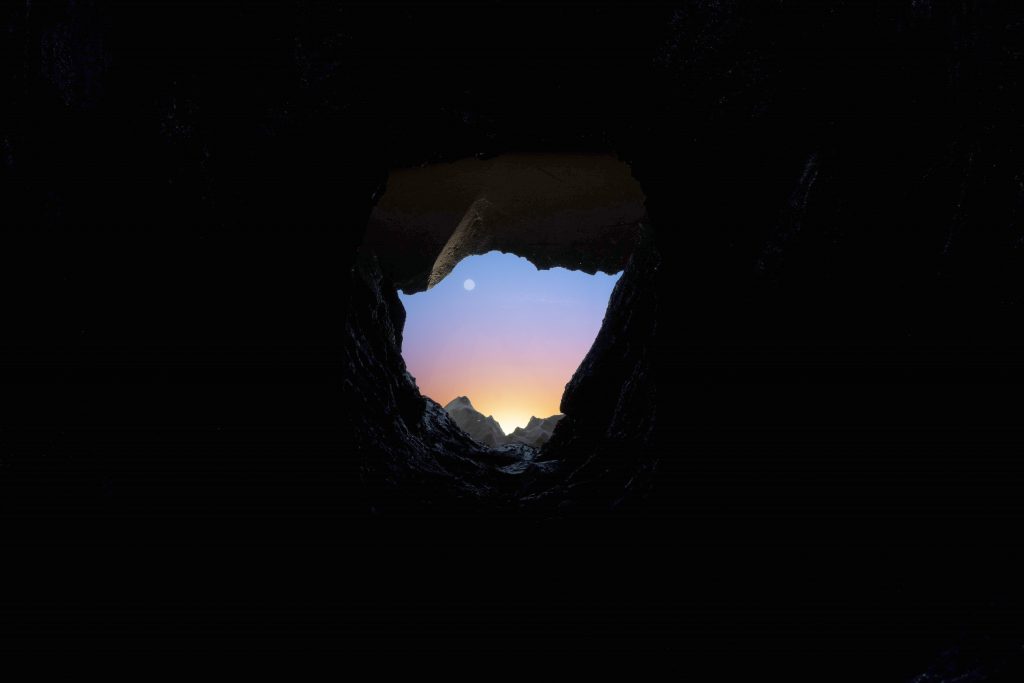 It’s always hard to survive as an artist, especially at the beginning of one’s career. How have you been navigating that?

My job as a scenographer allowed me to obtain the statut d’artiste rather quickly, so I don’t have any worries in that context. Otherwise, I would absolutely not have been able to continue my practice as a visual artist, especially because I don’t really sell my work: I mainly create in situ installations that are temporary and can’t be commercialized. I’m only able to finance my productions because of subsidies.

What’s your working process like for a new piece? How do you get from the the idea to the final artwork?

I start by doing sketches, and then I make 3D models of what’s inside my head. After that, I spend a lot of time making plans, as I work with optical illusions, and this requires detailed technical plans to make sure the visual effect will work on site. Then, I do some tests with models in my studio on a smaller scale. Then there’s the construction stage, and lastly, I build it all up in the exhibition space at my disposal.

Your installations are pretty large and complicated – I imagine you team up with other people? Do you sometimes wish it was just you and a canvas?

Haha, good question! Indeed, this kind of work requires a lot of energy, and I often ask myself why I chose to work in situ. But I guess that has to do with my job as a scenographer and my desire to occupy locations “spatially” by creating immersive scenographies…So, I let the idea come, and once it has to be brought to life, it’s already too late to give up, and the urge to see the final piece is stronger than my lack of motivation to build it! And yes, I of course have help as the installations are large and the constructions complex. I often work with a technical director (a term coming from the theater) who finds solutions for purely technical aspects, which is really a huge relief. I often also had the luck that students from La Cambre offered to give a helping hand. I’m really very well surrounded, and I am extremely thankful for all the support I have been getting!

“Quelques lueurs” – the title of your current exhibition at MAAC is taken from a poem. Do you read a lot?

Yes, I’m very inspired by literature and the poetic power of words. I read a lot when I was younger, but now a little less because I don’t always find the time. But literature clearly remains one of my preferred art forms, together with cinema and dance. Just a few words can create an entire imaginary world inside of us, of infinite interpretation. That’s what I love about poetry, we all find in it subjective and personal images, whereas other art forms might give much more guidance. My favorite writers are Marguerite Duras, Nathalie Sarraute, Georges Perec, Yves Bonnefoy,…

The childhood house plays quite a significant role in this show – what was your own like? How did it mark you?

I think my house was really quite ordinary, but the mere fact to live in a house (with a basement, different floors, dark storage rooms, and a frightening attic) has a big impact on a child’s imagination. But we moved out while I was still a child, and I had to leave a whole imaginary world behind, as well as the ghosts of loved ones who died there. It created a strong feeling of nostalgia in me for this place of memory and mourning… That’s why I regularly return to it in my dreams, thoughts, and work.

Nature, or natural elements, play a major role in this exhibition. What’s the idea behind it?

Yes, in my work I treat nature, or rather pieces of landscapes, like utopian locations, phantasmagoria, and places of reconciliation you want to physically cross and reach. The “over there” represented by some of my dioramas is the spot that catches our eye, like a geographical promise of a return to a lost place, creating a sense of spatial nostalgia. While we are destined to stay in the here and now, our gaze (and therefore our imagination) shifts towards an ‘Elsewhere’ that seems strangely familiar. These imagined  landscapes belong to an out-of-time and an out-of-place are from another world, very similar to ours, but populated by ghosts that we miss. I’m particularly thinking of that sentence by Camus, in “Exile and the Kingdom”: “Là-bas, plus au sud encore, à cet endroit où le ciel et la terre se rejoignaient dans une ligne pure, là-bas, lui semblait-il soudain, quelque chose l’attendait qu’elle avait ignoré jusqu’à ce jour et qui pourtant n’avait cessé de lui manquer.” 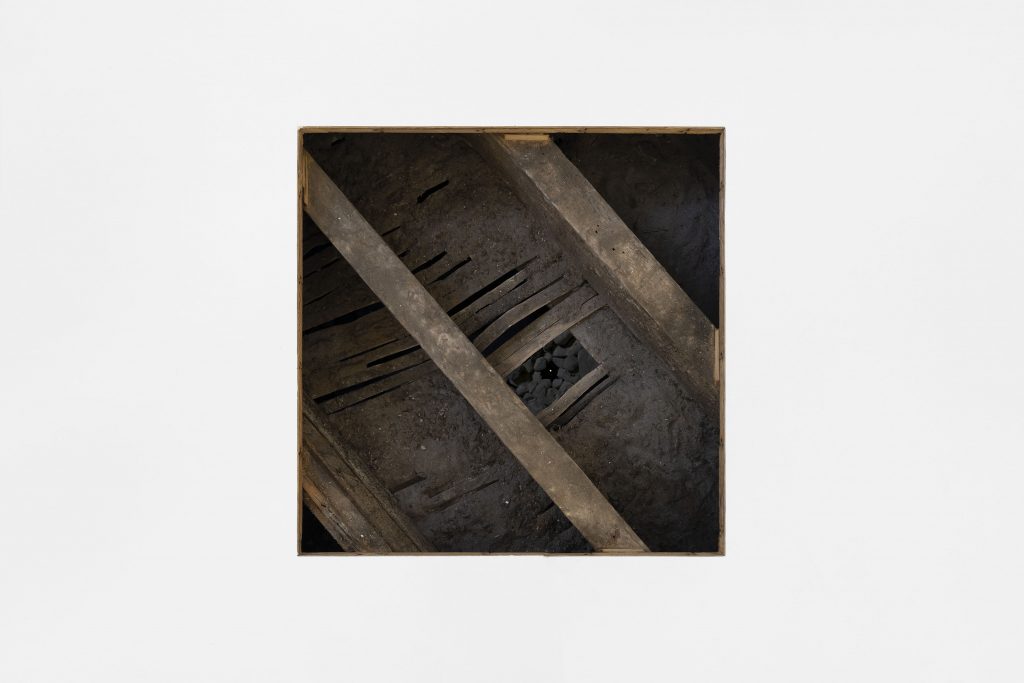 To create these in-between spaces, I often work with natural elements like peat, vegetation, or wood, letting the material trigger the imagination, and thus open a path, a link, between where we are and the depicted landscape. As the philosopher Gaston Bachelard pointed out, in order to trigger a memory, it has to find its material: an elemental matter gives it substance, color, texture. In my installations, I work with the four elements. The material imaginations are tied to fire, water, earth, and wind. The poetic force of these elements, which have their own autonomy, their own temporality, allows us to enter a metaphysical contemplation. In “Quelques lueurs”, water plays a central role in the narration that unfolds as the viewer wanders through the space.

Memories are another focus of yours – would you say you’re a nostalgic person?

Yes, definitely. Experiencing the loss of loved ones during my childhood created a quite evident nostalgia for the past inside of me. I am undoubtedly a nostalgic person – or rather, I was. My work has helped me to channel this feeling into my daydreams and allows me to be more anchored in the present on a daily basis. 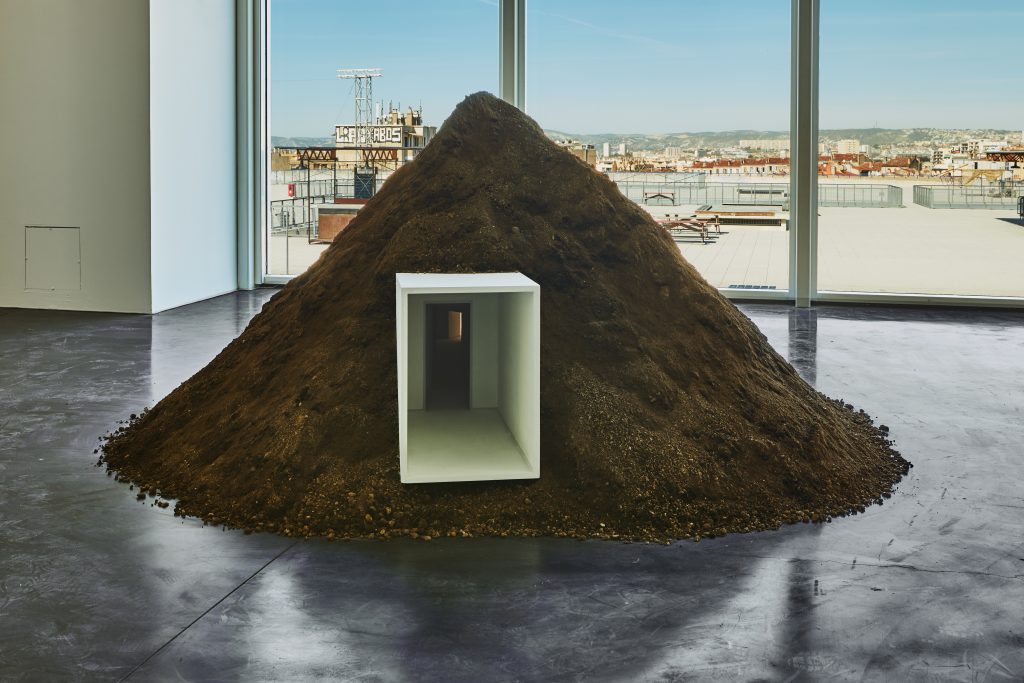 Three years of residency, that’s a long time. What did it help you achieve?

The fact to have been able to occupy a large-scale studio at MAAC these last three years has been a luxury that allowed me to take my time to think and reevaluate my approach, after several years of creating works in situ without having a studio. As I didn’t have a location to build things before, I had taken on the habit of pretty much directly building the entirety of my installations on site, in the exhibition spaces. This kind of accelerated production caused a lot of stress. Once I was at MAAC, I was able to imagine things on a larger scale as I now had the time and space to build them.

The exhibition I thought up for MAAC is a very personal one. I think, what I am mainly trying to achieve, is to create an intimate connection with the viewer, without having direct contact of course, but I hope that my work subtly touches the sensibility of a person. And that it echoes their own feelings of nostalgia…

You are French but based in Brussels. Is it a good place for a (young) artist?

Yes, I really like Brussels. A lot of great things are going on here, and the city is very dynamic culturally. As a scenographer, I especially like the theatre and dance scene, it’s great to have so many different venues when it comes to performing arts.

Your 3 favorite places in Brussels?

What are you currently working on and what’s coming up next for you?

At the moment I am working on the set for the next creation of the Peeping Tom company. The premiere will take place next September at the Lyon Dance Biennale. I’m also collaborating for the first time with the director Jean Le Peltier whose work I admire a lot. And then I have to start thinking about my solo show at Botanique next fall.