The lines between art and design blur at Ghent-based Yurt. Co-founders Tim Callier and Lore Rabaut are interested in a new kind of exhibition space. Feeling confined by the traditional gallery structure, the architect and artist created a site that is neither museum nor gallery, and not dedicated solely to art or design. Rather, their self-described nomadic project space’s first exhibition “Amplitude: Lore Rabaut“explores the intersection of art and building, in the context of landscapes and naturalism. We spoke to Tim and Lore about alternative spaces, naturalistic art, and operating in Ghent.

How would you describe Yurt’s philosophy?

Tim Callier: Yurt is a nomadic project space. The name was created by Lore, and I think it is a name that says a lot about what we are looking for.  (The Turkic word yurt originally referred to the imprint left in the ground after moving a nomadic home. In modern Turkish, the meaning has evolved to signify home. In other languages, such as Mongolian and Russian, the term always referred to the movable home structure.)

Lore Rabaut: The idea of Yurt is that everything will be related to landscapes, architecture, art and philosophy. It’s open – we have good connections and a good network.

What is a nomadic project space?

LR: It’s related to something natural, something from the landscape. There is a nice philosophy surrounding the yurt and its interior, and that you can move it. So our idea is that we are not fixed in one space. There is one space here in Ghent, but it is also possible to move, to look for empty buildings, and to work with other people who are thinking like nomads. For example, it would be nice to do an exhibition about nomadic architecture. It’s not really “art” art, but all aspects of the yurt and its philosophy.

TC: The yurt gives a well-framed, well-designed context. It is an architectural form of protection; we want to give that protection to an artist who comes to work with us.

LR: The context is well-framed yet open. We need such things now. I have been working for a long time with galleries doing exhibitions and it always felt really strict, really heavy.

TC: It’s important to give air, to give breath, to give space to an artist. With Yurt we can do this. 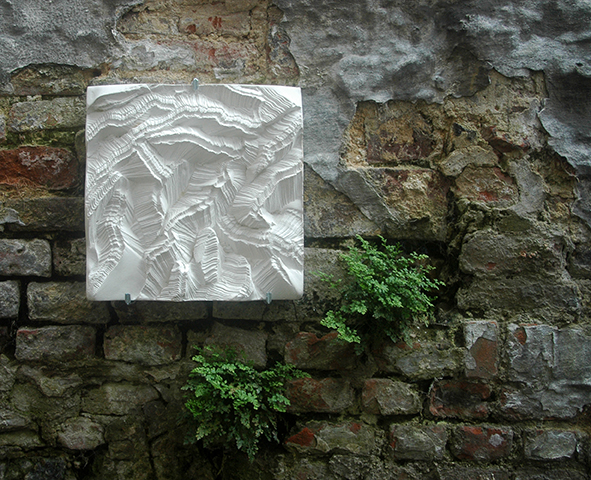 Will you represent artists?

TC: No, we will not be the manager or mentor of an artist. We will help them and brainstorm with them the best way to show their work with us but we will not claim them.

LR: We are more interested in those with an interest in yurt – for example, a philosopher of architecture who studies its meanings. Such a person could be combined with a landscape painter. 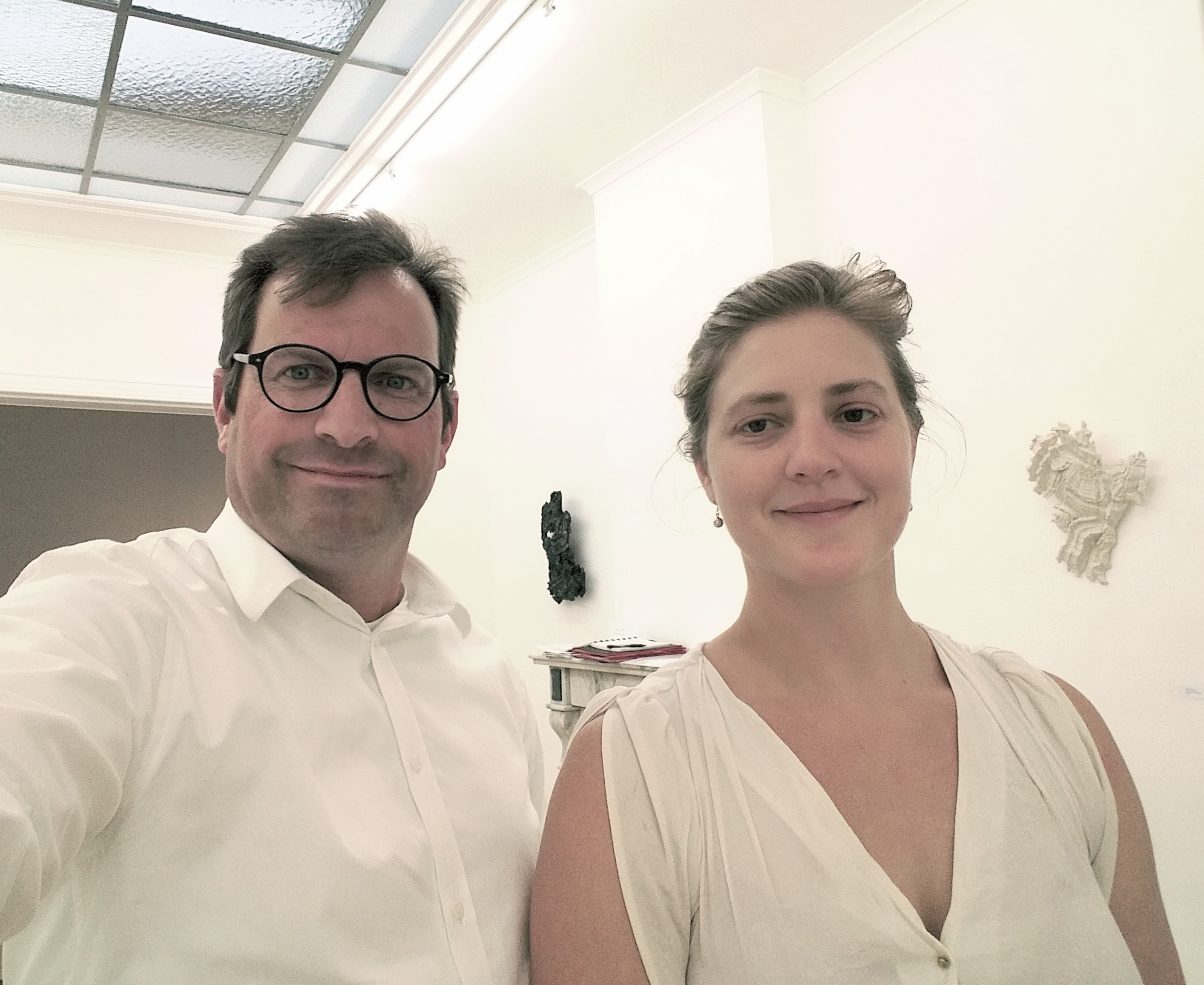 How does Lore’s work (the subject of the current exhibition) relate to Yurt’s mission and philosophy?

LR: I studied architecture for two years but decided to work with it in the language of art. This allows me to say something about space in general. I am focused on the idea of the horizon. It is the end of the world, a fictive line: unreachable but always seen. It is important for us to orient ourselves on this planet. That’s my philosophy. I thought about how I could make new landscapes and spaces. I take photos, scale them, and use them to make sculptures. I did a residency in Poland, where I focused on the city and this summer I will go to Sweden to find new horizons. I translate them into really new, wild sculptures. The exhibition gives a general overview of my work but at the same time focuses on our new project with handmade plaster tiles, where each line represents a horizon.

TC: The tile can be framed in the normal composition of the floor. It can be set in concrete or wood, or in a table as an archaeological piece.

LR: I really love how Greece manages to combine art and architecture, and wanted to do something in that context. 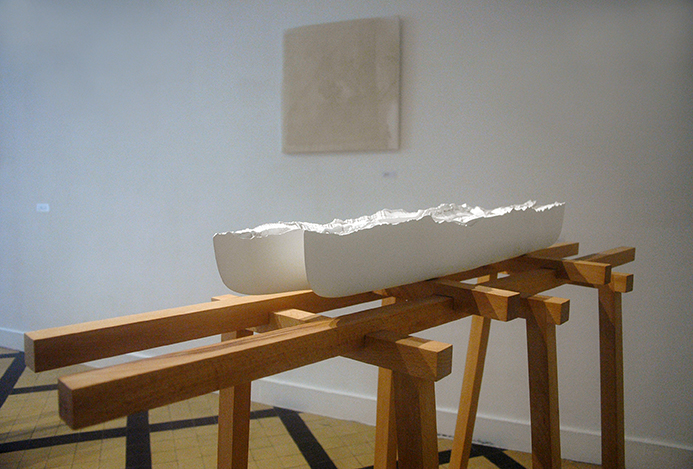 Are you talking to anyone about installing the tiles in other spaces?

LR: Yes, we spoke to a few people who are really open to it. But it would have to be done really well.

TC: It’s made for an individual project, not a commercial, mass-produced item. We want it to remain a piece of art.

Do you have subsequent exhibitions planned?

TC: After Lore’s exhibit there will be a show presenting nine curatorial Master students from KASK. They will introduce four or five international artists who will work together with them.

Why did you open Yurt in Ghent?

TC: It was a natural decision. I had a pop-up exhibition here last winter, focused on art and design. I was able to use a house for free, as part of a city-sponsored initiative to support areas where the new tramline is being built. The owners next door to the house had a space here, and that was the next step.

LR: People here believe in us. 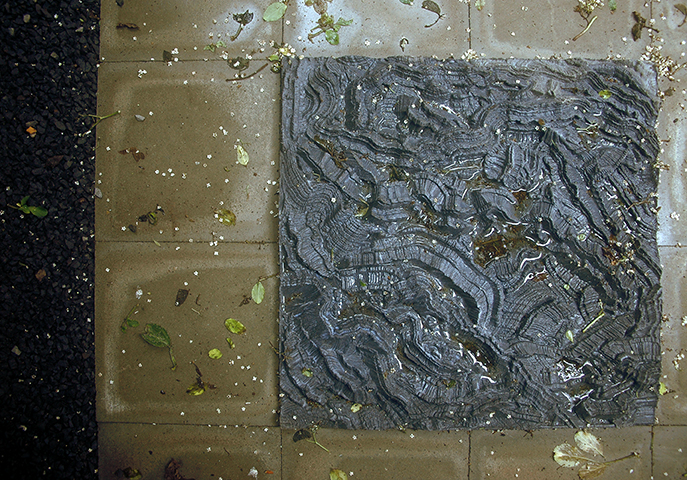 Will you transform the architecture of the space for different exhibitions?

TC: Right now we are painting the space white. It’s very simple but clean. I have lots of ideas for the future, but they all cost money. Most importantly we want to show art integrated into the environment, so that the visitors understand how a piece can be integrated into their interior, too

LR: That’s why I wanted to achieve a real integration of art and architecture by using tiles on the existing outdoor terrace and as well on a terrace I built inside. The space is like a showroom – but a really good one.