The Belgian capital’s vibrant art scene is changing and growing, but there’s no doubt that Art Brussels remains the Grand Dame of the city’s rising number of art fairs. This 35th edition once again offers an eclectic mix of the art world’s biggest names and emerging talents under the theme “From Discovery to Rediscovery”. 145 galleries from 28 countries – the sheer size of the fair can be quite overwhelming. That’s why we made the rounds for you and checked which booths you absolutely should not miss during your visit.

One of Art Brussels’ standout features are its well-curated solo booths, which offer a refreshing retreat from the at times supermarket-like atmosphere. An absolute must-see is the one by French artist Laure Prouvost, a complex, captivating installation combining sculptures, textiles works, text-based pieces and a video work at its center, which speaks directly to the viewer.

Xavier Hufkens presents another brilliant solo booth, featuring three large-scale pieces by Canadian artist David Altmejd. The sculptural wall creations whose protagonists seem to jump out of the frame blur the lines between painting and sculpture, interior and exterior, surface and structure.

Photography fans should head over to Paris’ Galerie Sage, where you can discover a fascinating mix of some of photography’s greatest, from Nan Goldin‘s poetic, intimate works to a nightsky shot by Wolfgang Tillmans. The center piece is a sort of mosaic by Italian artist Luigi Ghirri, whose known for a certain soft elegance. “Atlante” from 1973 is one of his more conceptual works, exploring the experience of evoking memories, images and associations when reading a map. “In this work, I endeavoured to carry out a journey in a place which effaces the journey itself – because, within the atlas, all possible journeys are already described. The ‘happy places’  – so precious for our literary history and for our hopes – have now all been decribed, and it seems the only possible journey or discovery left is that of re-discovering previous discoveries”, says the artist himself.

Vaclav Magid, who not only understands himself as an artist but also a philosopher, explores the question of nature versus culture with both video works and text-based pieces. Are we resistant to change because we see our culture as natural? Highly interesting.

LA’s Steve Turner gallery gave over its booth to Mexican artist Pablo Rasgado, who replaces the typical art fair white cube with “Floorplan”, an architectural installation comprising five connected walls into which he incorporated fragments of museum exhibition walls from the Museum of Contemporary Art in Antwerp, M HKA. The installation is completed with artworks by other artists which Rasgado selected himself, representing a variety of materials, countries, and narratives. 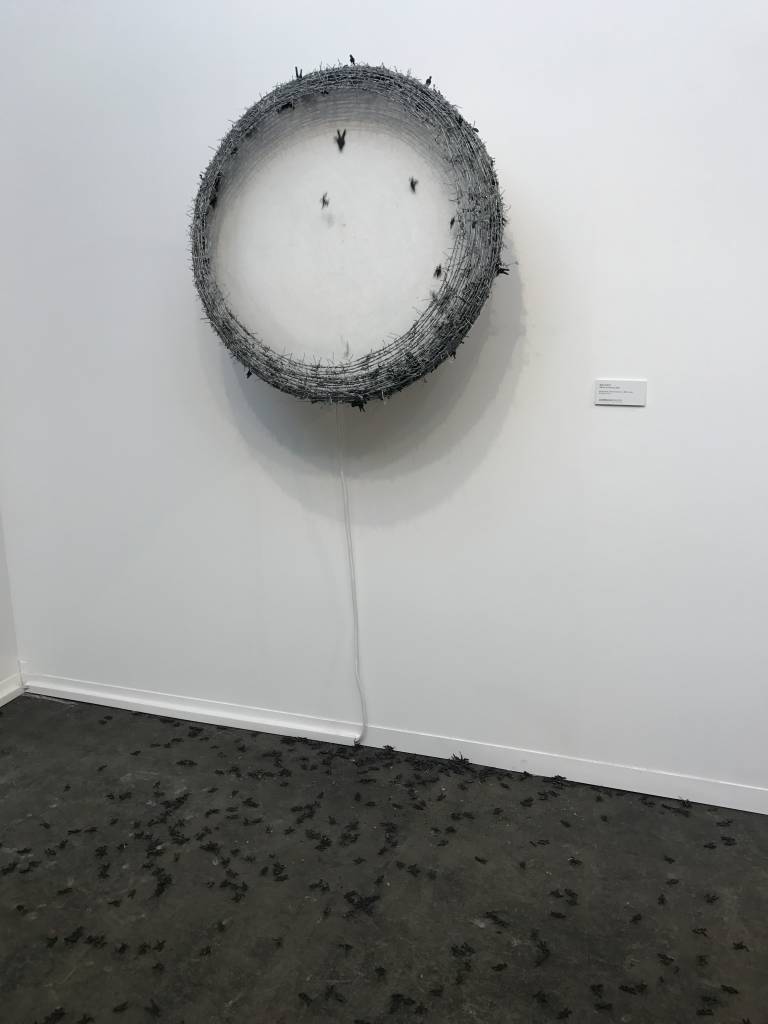 Iraqi-Kurdish artist Walid Siti is known for his politically charged reflections on forced migration, exile, war and political paradoxes. Istanbul’s Zilberman Gallery presents, among other pieces, his haunting “Wheel of Fortune” installation: plastic figurines are placed in a turning wheel made of barbed wire, and with time more and more figurines are falling through the gaps.

London’s Tiwani Contemporary brings together two young African artists. Ethiopian-born Robel Temesgen‘s work is informed by a phenomenological approach that wants to illustrate the lived experience of landscape in the context of the Ethiopian belief and rituals. In order to do so he breaks with past painting traditions and linear approaches, looking for a new visual language inspired by Ethiopian healing scrolls: his paintings float from the wall onto the floor. Angola-born Délio Jasse is an artist who mainly works with photography, especially found images, the theme of memory, and analogue printing processes. Here, he presents a series inspired by the abundance and layering of advertising posters in his native Luanda, reflecting the raid social and economic changes in the city’s urban landscape. Also  on show: “Cinema Karl Marx”, which documents the history of a now abandoned movie theatre in Luanda.

Harlan Levey Projects won this year’s Discovery price, and rightly so. The booth shows an intelligent, politically engaged program bringing together three artists: Emmanuel Van der Auwera‘s Memento series explores the media’s representation of the crowd as well as how catastrophic events write themselves into collective memory, Ella Littwitz‘ floor installation is composed of soil stemming from the 24 countries the Israeli artist is not able to visit because of her nationality, and Haseeb Ahmed‘s “Wind Egg Experiment” deals with questions the colonization and human population of planets as well as new ways of creating life.