Last month Brussels’ vibrant art scene got another ambitious addition: Saloon, a brand new art space run by Belgo-German couple Judith Van Eeckhout and Felix Kindermann, opened its doors for the first time on 2 December with a fascinating exhibition by Lina Viste Grønli. We spoke to the musicology expert and visual artist about their concept, Saloon’s debut show, and why a society just can’t do without art and culture.

Can you explain a bit how Saloon came into being?

Felix: We’ve known this space for quite some time. I first saw it when I had just moved to Belgium, seven years ago, as it was part of the studio of a friend of mine. Back then I already figured it would be great to do something with it one day.

Judith: We felt the urge to set up a project together, to get up and just do something. And this space is just incredibly beautiful. It’s compact, yet very generous, and the high walls just ask for something to be shown on them.

So you fell in love with the space, and took it from there?

F: It’s a what-you-see-is-what-you-get kind of place. Big enough to work, yet small enough to play around with. Especially for artists who are not very experienced and might still have trouble working with bigger spaces.

J: This is exactly what the concept of Saloon is about. We mainly want to show solo exhibitions by artists with an interesting artistic position. They can be young and emerging or somewhat more established, but in both cases, they have carte blanche, a wild card to use the space as they please. Whether they want to create new work, show existing work in a different set-up, or something that deviates from what they usually do – all of that is possible, as it’s a very manageable space.

What about the references behind the name you chose; Saloon?

J: You should ask Felix!

F: What do you think?

It makes me think of Lucky Luke. And the historical art salons I suppose…

F: It sounds and looks beautiful, but more importantly: it’s a name with a positive feel to it. And of course there’s the historical reference to the salons as a place where people came together to enjoy and discuss art, which date back to the 17th century. They were the place  where artists became famous, especially after the French Revolution, when the salons were opened to the public. At a certain time, galleries interestingly started to show work by artists who weren’t allowed at the salons. In a way, by offering artists an alternative to the institutions and galleries, Saloon is an extension of that tradition.

Judith, you have a background in art sciences, with a major in musicology. Felix, you hold a master’s degree in visual arts and industrial design. Seems like a rewarding combination; how do you like it so far to work together as a duo?

F: We’re still in the process of discovering that, but I never even gave a thought to it not working out. We always point out the same things during the working process, we have the same attitude towards art, and most decisions we don’t even need to discuss. Just recently we were in Paris at the Fondation Louis Vuitton and out of a collection of over fifty works, we were both enchanted by one specific piece by Cao Fei.

J: Having been a couple for quite some time now, we’re both very much aware of how we influence and inspire each other almost continuously. I’ve been going to exhibitions with Felix for years and in return, music is obviously present in his work as a visual artist.

You mentioned that you don’t only want to show emerging artists. But don’t the requirements rise a lot when going upstream?

J: Well, we didn’t really know what to expect in that department, but up until now the responses have been great. In the case of Lina Viste Grønli, for example, we thought she wouldn’t be easily accessible, but wanted to give it a try anyway. And then she replied immediately and with great enthusiasm, even though she was super busy with working on a piece just outside the United Nations in New York. It’s great to see how intensively she’s been thinking about her project at Saloon. You can feel that her show here in Brussels in this small and unknown space is equally important to her.

F: At the moment we’re in touch with the German artist Thomas Rentmeister, whose work we’ll hopefully be able to show in June. He’s been around for quite some time and has had big exhibitions around the world, but the same is true for him. He’s been really easy-going and supportive towards what we’re trying to do here. I guess there’s just a mutual understanding and a personal click, and that gets you a long way. Plus, we don’t necessarily want to show the work of upcoming and established artists in a more accessible manner, but as a direct encounter. I can’t help but be under the impression that artists such as Rentmeister are quite keen on that idea, to be brought back to the early beginning, back down-to-earth, as opposed to galleries or the big institutions.

How are you selecting the artists? Is there a system you can adopt to get past your personal taste?

J: That’s where you start there of course, but then you begin asking yourself: does this artist or this work hold an interesting position?

J: Possibly, but not necessarily. With Lina’s show, we’re dealing with a politically inspired topic: it’s called EURO for a reason. The next artist we’ll be showing however is Peppi Bottrop, who mostly does abstract drawings and paintings. This makes it much harder to find something political in his oeuvre. His work rather emanates from an art historical tradition or a certain aesthetic. Their practices are completely different, yet both of them hold interesting positions.

F: Well, then you’re touching upon the question: “What’s interesting?”. In the case of Peppi it’s the biographical aspect of his work. Coming from Bottrop, an old industrial area in Germany, he uses charcoal to create large-scale drawings.  In a way he liberates himself culturally from his industrial background – his father was a miner. Peppi managed to find a very specific approach to painting, with an energy that you don’t often find with young artists. This really appealed to us, plus Peppi hasn’t been shown in Belgium yet. 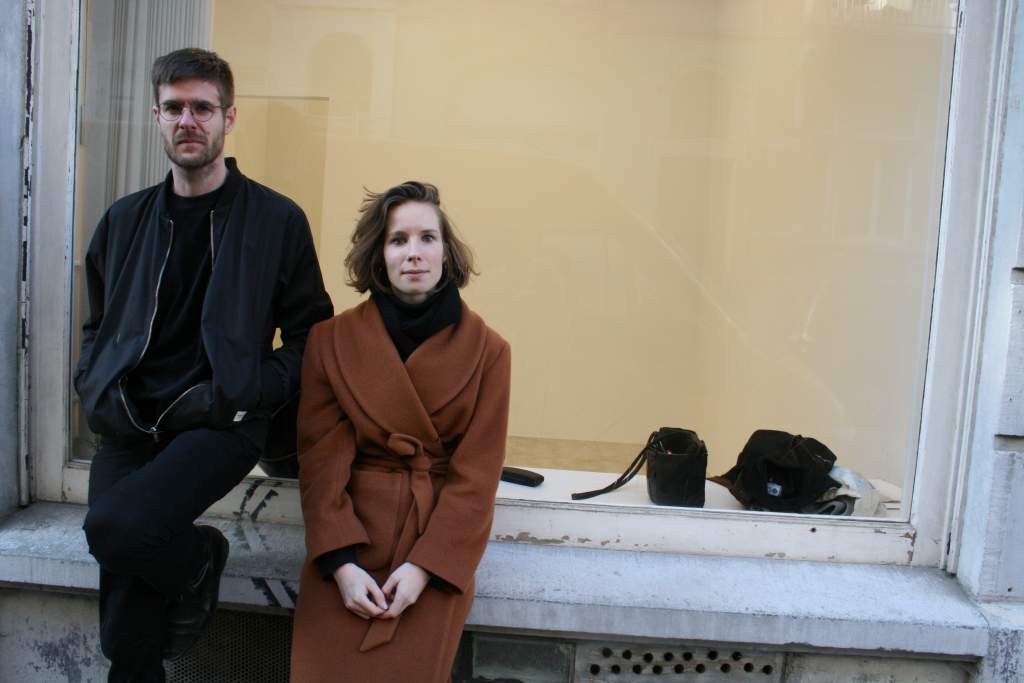 Recently a study commissioned by the Flemish ministry of culture was published, claiming that merely 10% of all artists can live off of their art. Do you feel off-spaces such as Saloon contribute to or neutralize these figures?

J: That’s a delicate matter. Artists not getting paid isn’t necessarily related to the existence of off-spaces. The art world is indeed based on a pyramidal system, but fees for artists and off-spaces aren’t mutually exclusive. Off-spaces emerge from the energy of a few individuals who believe that it is important for art to be shown; for art to become a part of public life. Take the pop-rock scene in Flanders for example: at first there was a breeding ground of local bands and small venues, very vibrant and lively but without financial support from the government. Today, the local clubs from Trix to De Kreun are the cornerstones of Flemish cultural policy for pop and rock. But it was the bottom-up scene that raised political awareness.

F: An artist should create art. And it’s equally important that artists get the chance to show what they do. At this moment in time, there are perhaps more artists than ever, and here in Brussels the inflow is especially high. There is only a limited space available in institutionalized spaces. The amount of exhibition facilities should be proportional.

In what way does art appeal to you and the many people who want to be part of the scene surrounding it?

J: Bruce Nauman said something interesting about that.

J: In a way, cultural expression is the one thing valuable enough to be passed on. It’s Bach’s music, gothic cathedrals, and paintings by Pollock which have survived until this day. We can look at all those things and feel that they’re part of who we are. Of course politics or economics are also products of modern civilization, but I strongly believe that art has a different significance in the light of history than, say, an 80s Volkswagen.

F: The first Volkswagens were super pretty. You may want to go and preserve those too.

J: Okay, wrong example. Still. You want to search for meaning, for what’s relevant. What are we doing? What comforts us? What is it that reflects upon our actions without looking at them from a functional perspective?

F: I can only speak for myself when I say art makes it all worthwhile. Art is what makes me aware of my restraints, time and time again. Emotionally, intellectually. Art is always incomplete. The artist strives to create art, but hardly ever succeeds. You can pursue art, but you can never reach it. You can buy art, but you cannot own it. And for me that is enough to know that I’m making the right decisions. Or to quote Nauman again: It’s “To keep me busy.”