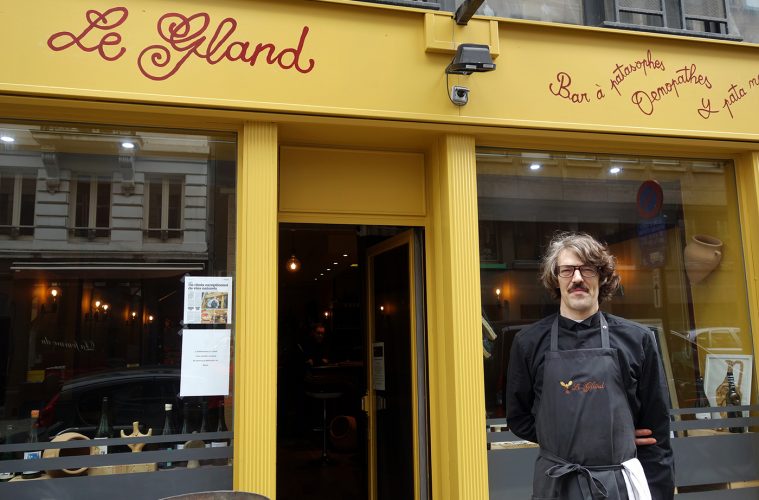 Originally from Southern France, Pierre Casteils (41) settled down in Brussels to open Le Gland, a wine bar built around the former musician’s passion for exceptional products. After having travelled extensively around France and Spain on a quest to find winemakers and artisans driven by excellence and respect for nature, he shares only the very best he found with his customers. Located in the Rue Royale neighbourhood, Le Gland is all about good wine, good food and a good time: “The art of the table is about the art of life”, Pierre says.

Originally you’re a musician. Why did you decide to open up a wine bar?

Music is a passion, like painting, literature, philosophy or the “art of the table”. I’ve been dreaming for years about opening a place where I can combine these passions, creating a meeting point around wine and gastronomy at an affordable price.

What sets you apart from other wine bars in Brussels?

As I’m originally from Southern France, I personally know the producers and how they work. Plus, I know the food scene in Brussels quite well and noticed some of the best flavours were missing. That’s how I came up with my own concept and list of additive-free wines in combination with organic gastronomy with products from Languedoc-Roussillon, Toulouse, Bourgogne, Spanish Catalonia and Andalusia.

Did you have any experience in the restaurant business? What was the process like to launch your own?

I began to work in the Horeca industry at the age of 20. I’ve always liked the contact with people and the concept of sharing. For the launch of Le Gland I felt like I was doing the job of five different people. Especially the administrative part was hell.

How did you choose the location?

Finding the perfect location that fits your budget is very hard in Brussels. Initially, we were looking at a space around Place Stephanie, but it didn’t work out with the landlord. Finally, we found this space at Rue de L’Association. It’s still part of the city centre, but people need to know about it in order to come here. The neighbourhood is calm and there are a lot of businesses, culture and interesting people around.

How do you select the wines? What makes a good or bad wine?

The selection process of wine or food is simple: the producers have to be concerned about the planet, nature and other human beings. If they don’t care about these things, they wouldn’t do a good product, and I wouldn’t be interested in buying it.

Do you also have Belgian wine?

We don’t have Belgian wine but our bread is freshly baked from “C’est si bon” in Brussels, and of course we offer a few of the best Belgian beers.

What are the highlights people really should try?

That really depends on their taste. From any wine to cheeses, lomo de cebo, cecina, smoked anchovies, bonito, fresh escalivada with peppers and eggplant – they won’t be disappointed.

Any upcoming events at le Gland?

We are looking forward to host a wine saloon, reading battles, acoustic shows and even a radio station. So stay tuned!