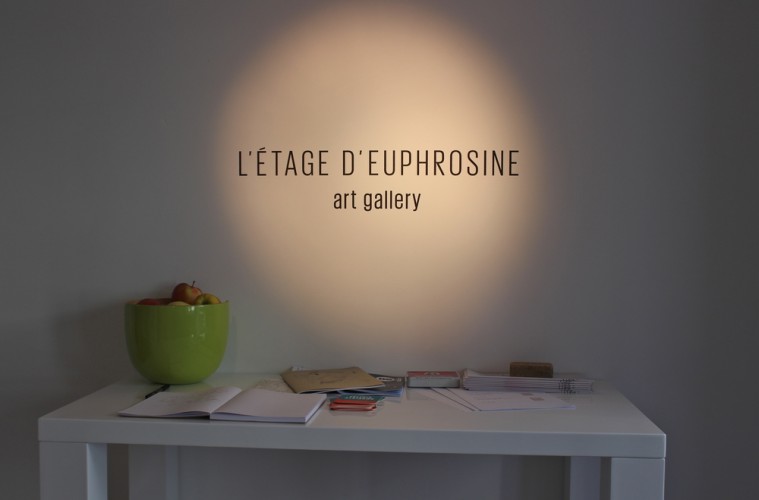 Things are moving in Ostend, and one of the reasons why is art passionate Emily Rammant. With her brand new, innovative gallery “L’Étage d’Euphrosine” she’s putting Ostend’s art scene on the map, blowing some fresh wind into the country’s most prominent coastal town. While the gallery’s first show earlier this year showcased the sensitive but powerful watercolours and installations of rising French artist Félicia Atkinson, the next exhibition opening this autumn will feature the works of Magda Amariorei, a young Romanian with a penchant for landscape paintings. Over homemade fries and fresh Belgian shrimps we had a chat with Emily about her new project and why Ostend is definitely worth a visit.

You opened your gallery just a few months ago. How’s the response been so far?

Really great. I immediately got approached by the few gallery owners here in Ostend because everyone was very curious. And now we’ve already been talking about organizing a gallery weekend together. The director of the local museum came to the opening and the event attracted people from everywhere in Belgium. I think many people like to have a reason to come to the seaside. It helped of course that we had quite a lot of coverage in the media, which is something we really worked hard on.

How did the idea come about? What’s your relationship with art?

My grandfather, who is 95 now, is a big art collector. He started buying art in the 50s, went to New York in the 60s, bought pop art and has always been very avant-garde in general. He also came to the opening which was very important to me. My mother had a gallery in Brussels for a while with a focus on contemporary Russian art. So I was always surrounded by art, and many times artists stayed at our house. But I never planned on having a gallery myself. I only had the idea when we bought this house actually. We were wondering what to do with the separate space downstairs and I directly felt it would be perfect for a gallery. Because I have a full-time job as a producer at an animation studio it’s impossible for me to open the gallery every day. So I’m going for a kind of pop-up concept focusing on events. With every exhibition I want to organize a big opening and closing weekend. For the moment I’m planning two exhibitions a year, one in spring and one in autumn. The focus is on international and Belgian artists who are on the verge of a breakthrough.

How do you get from the idea to your first show?

It was not even a year ago that I decided to do this, so it didn’t take that long. And if we hadn’t had some construction problems with the house I would have opened the gallery even sooner. I knew from the beginning that I wanted to show Belgian or international artists who are young and not really discovered yet by the world. It was also quite clear that I wanted to add a social component to the whole thing. I wanted people to come to Ostend and have a good time. When I was sure about my strategy I directly started looking for artists, found a designer to work with, made promotional material, wrote press releases…

How did you come up with the name?

It’s the name of a female painter from the last century. She mainly depicted landscapes and was born right here in this street. I also named the gallery after her because I wanted to add a female touch. It’s something quite important to me and I’d like it to become a theme in a way. If possible, I’d always like to work with female artists. We’ll see. Why the female component?

I think in many areas women are still underrepresented: music, professional cooking, art… It’s always the men who get the credit and I want to support the women. It’s also by coincidence: most of the art I like is made by women.

How do you select the artists?

A gallery has to have some kind of a line. But in the end it’s always the personal taste of the gallery owner that dominates. This is how you build your brand. I have a tendency to like more abstract art, but that doesn’t mean I won’t do anything figurative.  I’m open to everything. I don’t have a strict line, I just have to flash on it. It has to be something that’s approachable, that you can put in your house, that’s not a museum piece.

It’s strange to explain that. There’s something meditative about her art and also something positive. I didn’t want to show dark and pessimistic art. It’s quite colorful. And I like the fact that she is this multi-disciplinary artist who makes music and record covers and writes poems. I also like her personality.

Is it important for you to get along with the artist on a personal level?

That’s something I learned from my parents and my grandfather: you always have to know the artist before you work together or buy something. It’s so important. You should know their history and their vision and connect somehow. My grandfather was friends with the artists he worked with; every Sunday he went to have a steak with Broodthaers for example. Everyone always talks about Antwerp, Brussels and Ghent and Ostend doesn’t seem to get much love. You moved here after having lived in the Belgian capital for 10 years. What do you like about the city and what are your favorite spots?

Ostend is a mini Brussels without the disadvantages of Brussels! Both cities were created by Leopold II., so they have a lot of architectural elements in common. There is a lot of greenery and parks and something that resembles the Arc de Triomphe. At the end of every big street you’ll find a beautiful building. It’s a city you really need to get to know before liking it. It grows on you. Brussels is like that too, it has this little dark side to it and you need to look a bit deeper. I like that Ostend is rather small and safe. A real highlight is the hippodrome, a big part of Ostend’s history. They still do races there and it’s fun to watch and wear stupid hats. There’s also a beautiful Japanese garden and even an airport. What’s missing though is a good sushi place! Recently there have been quite some new initiatives here, for example a nice little café which is not only a breakfast place but also does exhibitions. It’s called Familie Jansen Kaffiebar as a reference to Tintin. There’s also a big new gallery/restaurant at the beach: Galerie Beau Site. I really like Vrijstaat O, a nice cultural café on the promenade. They always have interesting activities going on and it’s located in a beautiful building. My favorite mid-day bar to have lunch at is called Beau Site which offers a stunning view on the sea and functions as a gallery at the same time. The woman who owns it cooks herself, there are a lot of art books lying around, and it’s very cozy. And then there’s of course Brasserie Du Parc our go-to café where we end our weekend every Sunday at 17h00. A very inspiring place with a lot of different people from all ages.