Back on the block: 14 museum and gallery reopenings all over Belgium

While it’s been uplifting to see how the art world has reacted to the shutdown caused by the pandemic with creative ways to carry on digitally, nothing beats a physical exhibition visit. Now, this weeks-long hiatus is over, and the Belgian art scene has rebooted, opening its doors to welcome the public again, albeit with varying safety measures in place. Make sure to check the specific conditions for each art space prior to your visit! Many venues have prolonged or rescheduled their exhibition programs, and we’ve sifted through the current offer so you don’t have to – here are 14 unmissable shows all over Belgium, from Brussels, Mons and Charleroi to Antwerp, Hasselt, Ghent, and Aalst.

1 Chéri Samba at The Corridor 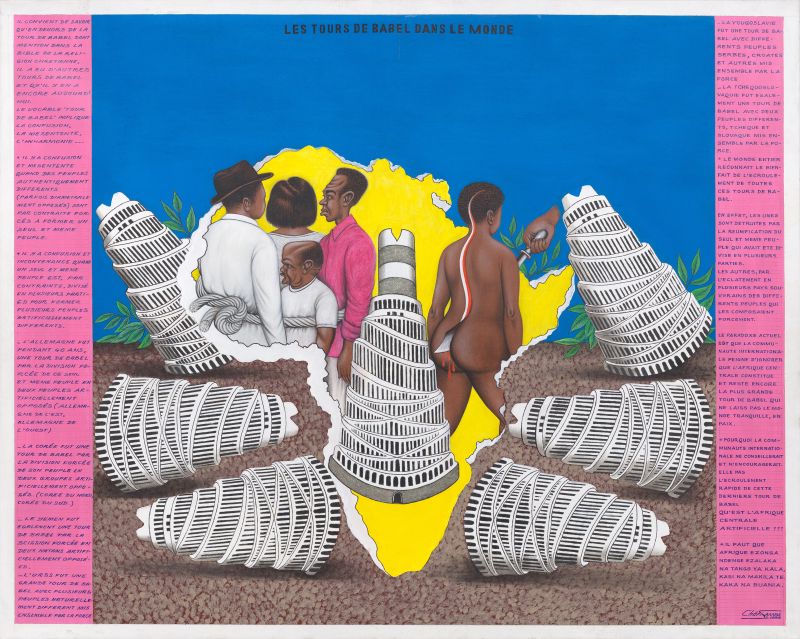 Chéri Samba (1956), a Congolese artist based in Kinshasa, is one of the most prolific and celebrated African contemporary artists. A founding member of the “Popular painting” school, his colorful, figurative paintings draw upon everyday life in Kinshasa as a subject matter while addressing social and political issues such as social inequality and corruption. Having worked both as a billboard painter and a comic-strip artist, remnants of both styles are apparent in his works currently on view at Antwerp’s The Corridor. Samba’s paintings have been shown at London’s Tate Modern, his pieces are part of the collection of the  Centre Georges Pompidou and the Museum of Modern Art in New York, and in 2007 he took part in the Venice Biennale. Absolutely not to miss! 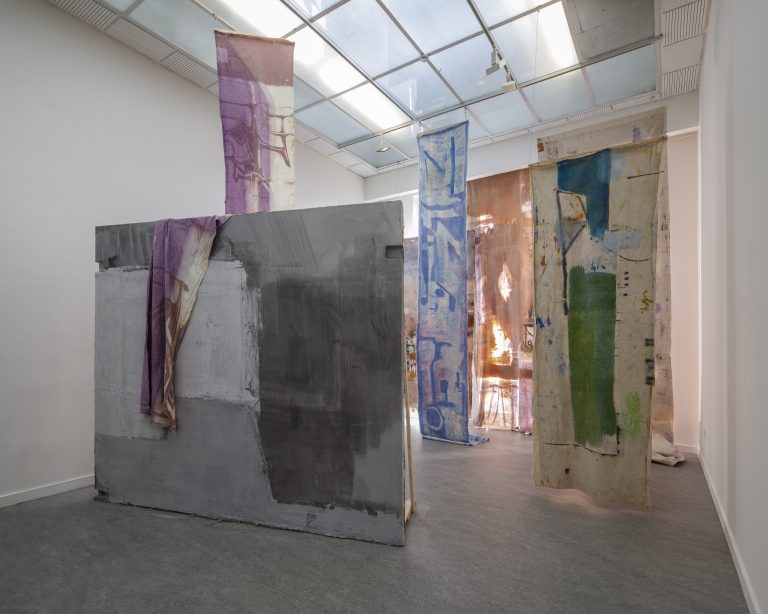 The starting point for the group exhibition “Birds of a Feather” are thoughts by French critic and philosopher Jacques Derrida on the role of archives. Today, we’re confronted with a constant flood of information, which some appreciate and others fear. Seven recent fine arts graduates play with their collections of images, symbols and stories, to some extent testing them against this mass culture – attempts to grasp today’s complicated reality. With works by Israel Aten (US), Myrthe Baptist (BE), Justine Court (FR), Jonathan De Maeyer (BE), Jonas Dehnen (DE), Leroy Meyer (BE) and Naama Roth (IL). 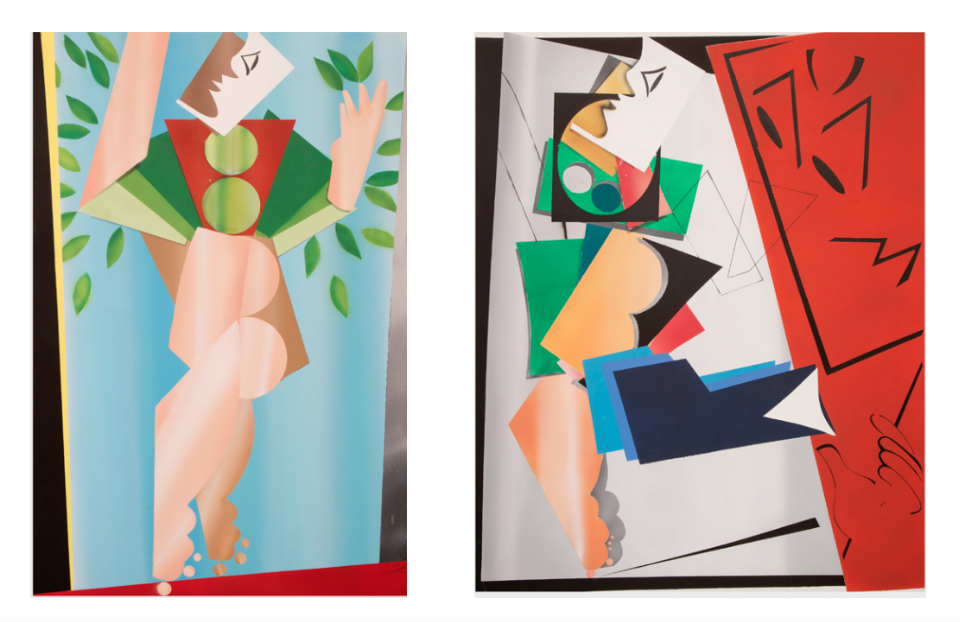 Brussels’ gallery Nathalie Obadia currently presents the universe of Iranian artist Hoda Kashiha (1986), part of the country’s rising and vibrant contemporary art scene.  The exhibition title “Dear St. Agatha I am witness of your tears In the land of Tulips” refers to the legend of virgin martyr Saint Agatha of Christian antiquity as well as Iran’s national symbol to commemorate both martyrs and justice: red tulips. Kashiha’s work is highly metaphorical, evoking pain, resistance, and perseverance experienced around the world. Heavy subject matters such as identity, femininity and gender issues, sensitive topics in her home country, are tackled with a more lighthearted visual style combining collage and comic. In Iran, Kashiha’s art would be banned due to nudity. 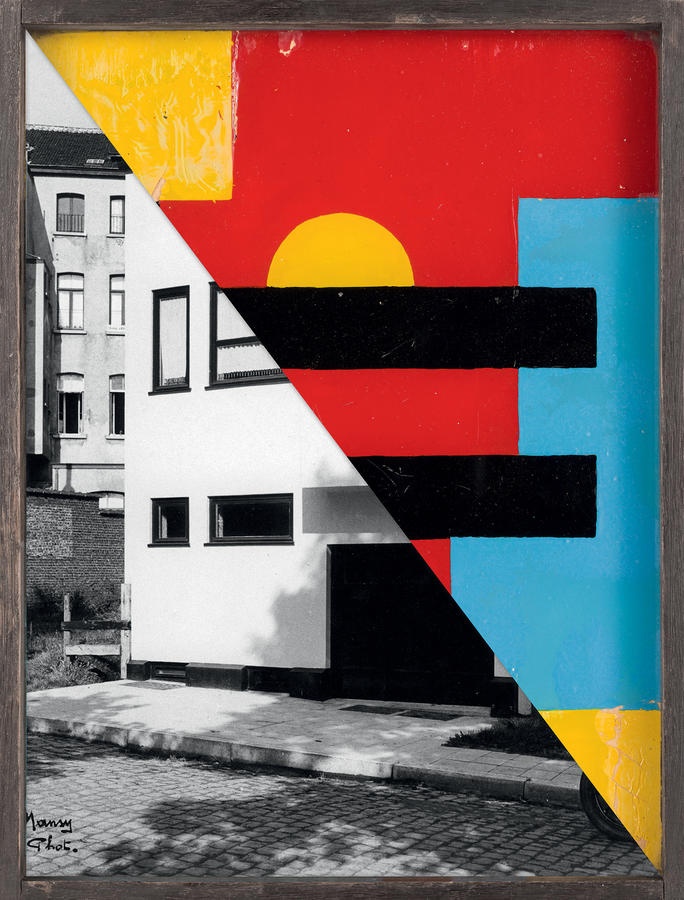 Between 1922 and 1928, the influential Belgian periodical “7 Arts” published no less than 156 issues. Created by Pierre and Victor Bourgeois, Pierre-Louis Flouquet, Karel Maes and Georges Monier,  it was a manifestation of the flourishing avant-garde in Brussels at the time. At the center was their love for plastique pure (geometric abstraction) which they understood as a synthesis of all art forms: painting, sculpture, decorative art, literature, music and film. The group attracted artistic minds such as Magritte, Servranckx, and others. CIVA now offers a trip down memory lane to that important moment in Belgian art history. 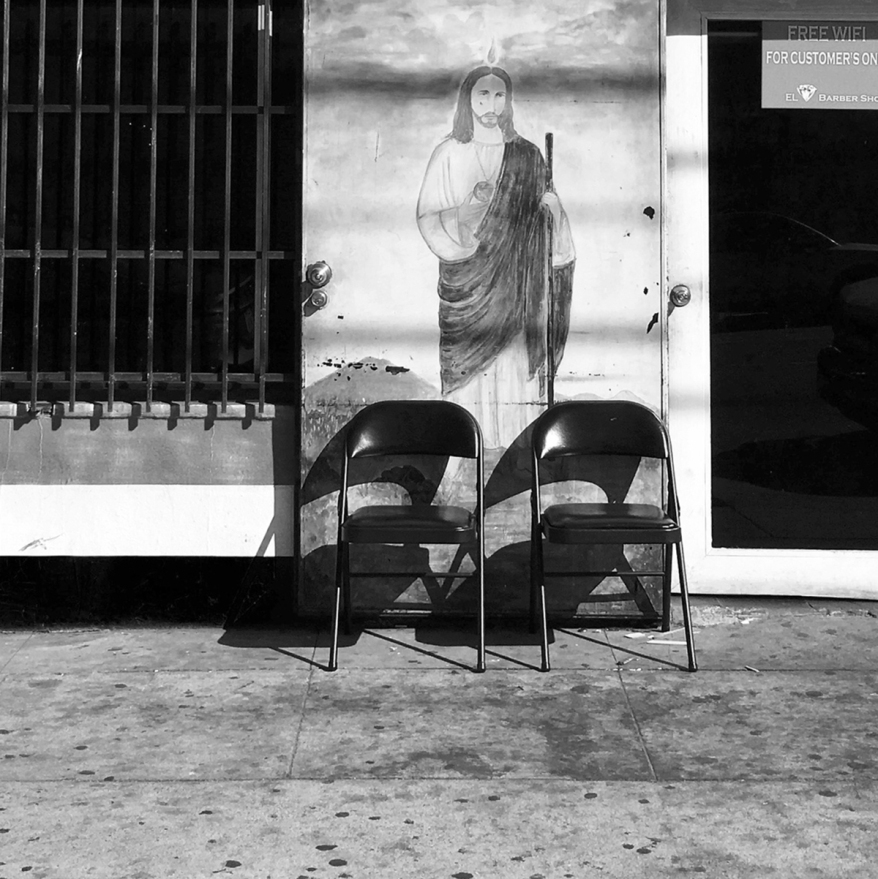 Diana Mater‘s “My America” couldn’t be on view at a more timely moment. Her powerful, thought-provoking series retraces locations of police killings of civilians throughout the US. It took her no less than two years to draw up a detailed map detailing the information about each case (about 2.200 total). In the end the American photographer visited more than 300 of the locations, and while the resulting photographs are of a very classical style, they were all taken with a regular iPhone. “Without smart phones, we wouldn’t know anything about these police murders”, she explains her choice. Mater’s photographs don’t exploit – they not only expose police brutality and a certain social decline but also silently pay tribute to each deceased individual. 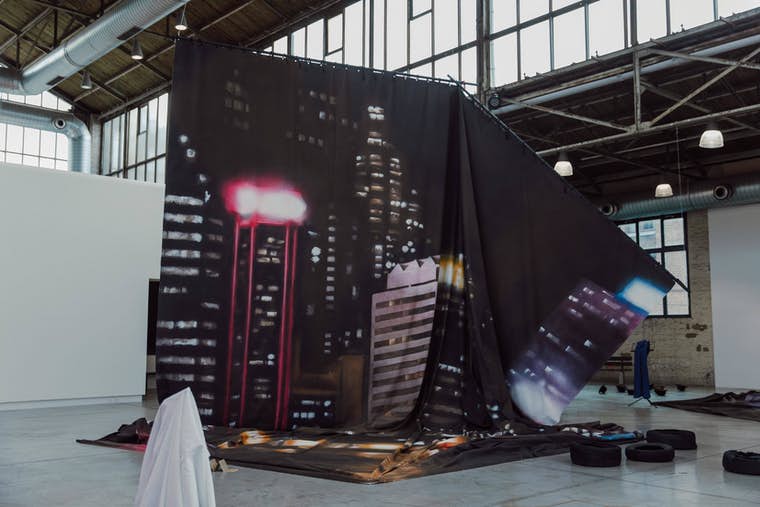 Political and poetic at the same time: Moroccan-French artist Latifa Echakhch, winner of the Marcel Duchamp Prize in 2013, delves into cultural stereotypes, questioning pre-conceived ideas about nationality, religion, and history. Through destruction or restoration she deprives objects with a domestic or social burden of their value, getting rid of the memories attached to them. “The Sun and The Set” is on view at Charleroi’s BPS22.

7 Figures on a Ground at CAB

“Figures on a Ground” at CAB shines a light on a lesser known aspect of Minimal art, one that touches upon themes such as  spatial perception, relationships, nature, the sacred, the body and spirituality. The exhibition brings together works by pioneering Minimalist as well as contemporary artists who are part of the movement or chose to question it. With works by Tauba Auerbach, Anna-Maria Bogner, Claudia Comte, Ariane Loze, Julia Mangold, and many others. 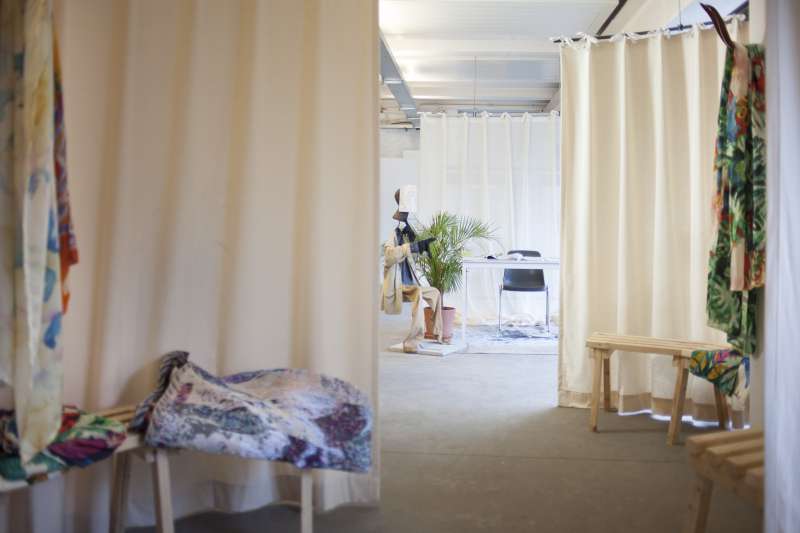 “Occupie Paradit” is the result of a collaboration between French artist Laure Prouvost, who represented her home country at last year’s Venice Biennale, and Italian artist Alex Cecchetti. Together they created a fantastical, immersive installation at exploring the notion of paradise which invites visitors to listen to stories about the cosmos and drink potions at the Love Bar.

What is an image in the digital age and how do we perceive reality? This is one of the questions German artist Thorben Eggers investigates with his paintings, currently on view at Ghent gallery Tatjana Pieters. Taking images from the digital realm as a starting point, he examines the relationship between analogue and digital surface by bringing back digital information to the real world: through the act of painting, the digital, perfect, smooth image now shows analogue “errors”. 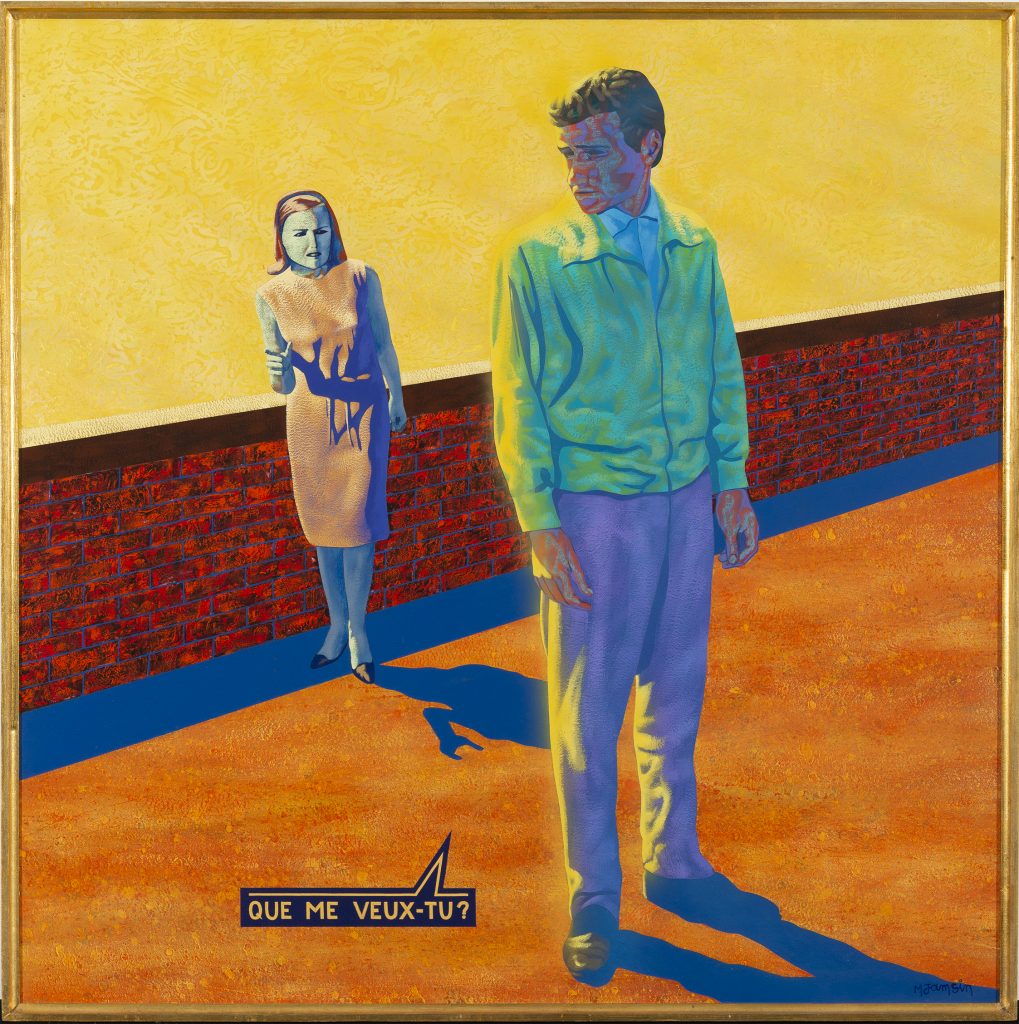 It might come as a surprise to some, but Wallonian city Mons has a rich history of painting to look back on. Although Mons boasted an Academy, a museum, and a regular art salon just like Brussels, Ghent, or Antwerp in the beginning of the 19th century, its artists have largely been forgotten. BAM now brings together no less than 150 artworks stretching back two entire centuries while also giving room to the town’s contemporary artists. 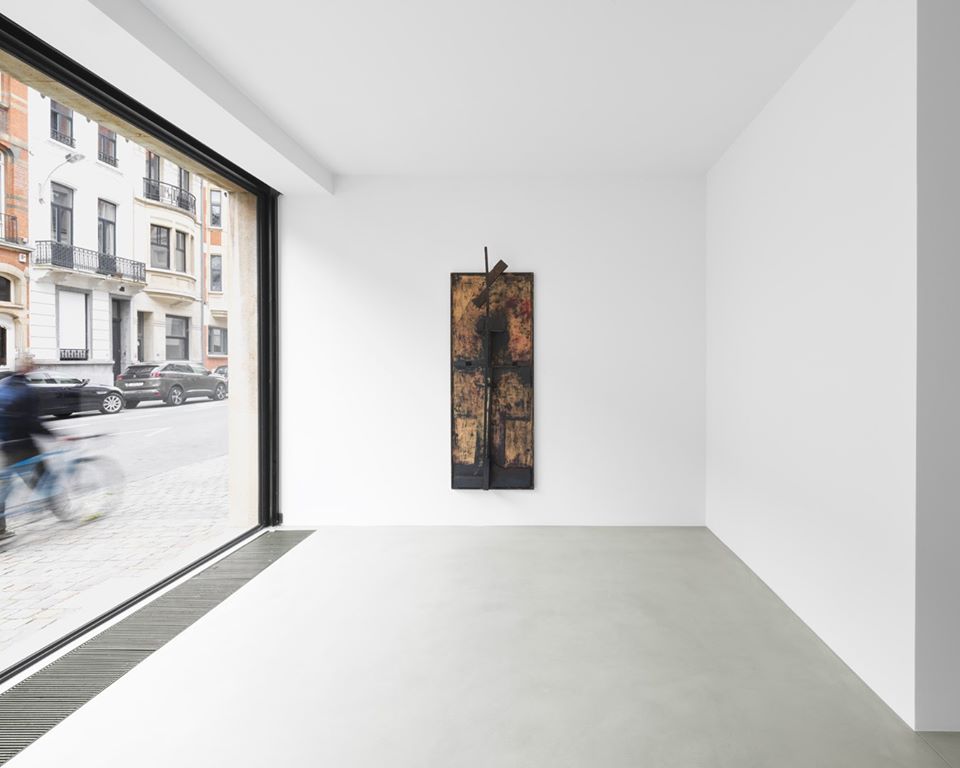 Xavier Hufkens keeps expanding: the art dealer just opened his third space in Brussels in a 1960s modernist building in 44 rue Van Eyck . (Here, he explains his choice not to branch out to Paris or London instead.) The inaugural exhibition, “A Relief Lashed + A Still Pose” is dedicated to American artist Sterling Ruby, whose fierce three-dimensional bricolages oscillate somewhere in between painting and sculpture. Noteworthy is also Ruby’s commitment to the recycling and reprocessing of materials – in his studio, nothing is discarded. This ever-growing material archive lies at the heart of his fascinating practice. 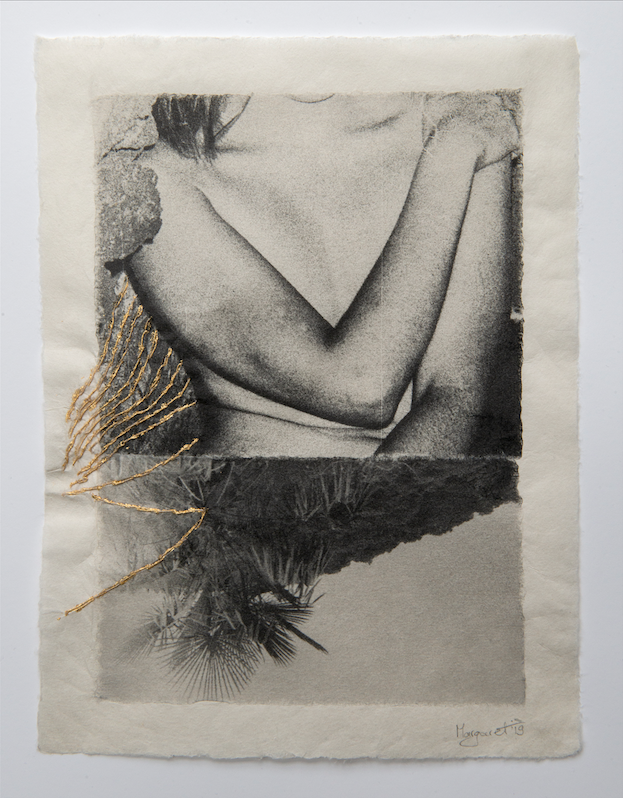 In this group show at Antwerp’s Ibasho gallery, twelve different artists connect with the Japanese concept of  Wabi Sabi, which is based on a world view centered on the acceptance of transience and imperfection. Take Mika Horie for example, who works with paper she makes herself from gampi trees and fresh mountain water and employs a cyanotype technique that uses natural daylight – accordingly, her pieces are unique, imperfect, and irregular. 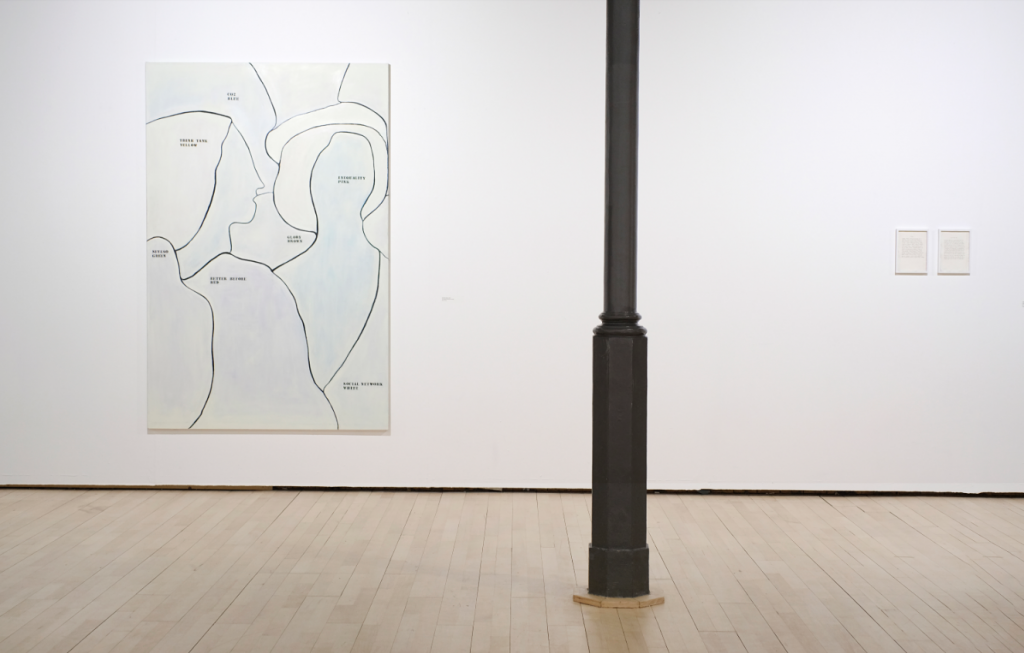 Sébastien Bonin, living and working in Brussels, originally started out as a photographer. In 2015, his practice took a new turn when he turned to painting. “Documenti” at Botanique displays paintings and so-called photograms of the last two years, which blend photographic and painterly elements while playing with art historic references, reclaiming, deconstructing and rearranging iconic images.

After quite a long period of compulsory gallery shutdowns due to the current pandemic, Antwerp’s Tim Van Laere decided to reopen with a different kind of show, a generous exhibition celebrating the gallery’s artists. 20 artists present recent and new works across all genres. The exhibition includes, amongst others, four new drawings and a film by Marcel Dzama, a new work on paper by Adrian Ghenie, a monumental work by Kati Heck, three new sculptures by Edward Lipski, two new paintings by Bram Demunter and three new works (a ceramic sculpture, a small colour drawing and a charcoal drawing) by Rinus Van de Velde.