With the hot season around the corner (well, let’s keep hoping), special summer projects keep popping up all around the country. One of the most interesting ones is a brand new picnic take-away concept thought up by the people behind AUB-SVP. Since their beautiful restaurant in the foyer of the former Cinema de la Monnaie is lacking a terrace, they decided to team up with Brussels culture center Beursschouwburg, which boasts a stunning rooftop deck. And because there is a bigger story to this summer-only pop-up project, we decided to meet up with Joris Lens, founder of the restaurant, to find out more about it all.

You just launched “Picnic. Sharing Public Space” at the Beursschouwburg, can you tell us a bit more about the concept?

The idea is to motivate people to go and make use of Brussels’ public space, while enjoying a healthy and finger-licking picnic made from local and organic products. We offer take-away in the form of sandwiches, mixed picnic boxes, sweets, and difficult-to-find drinks. On the napkin we printed a map of Brussels highlighting picnic spots: easily accessible hidden gems where you can go and enjoy your food. And of course you can also eat it right away on the Beursschouwburg’s terrace. 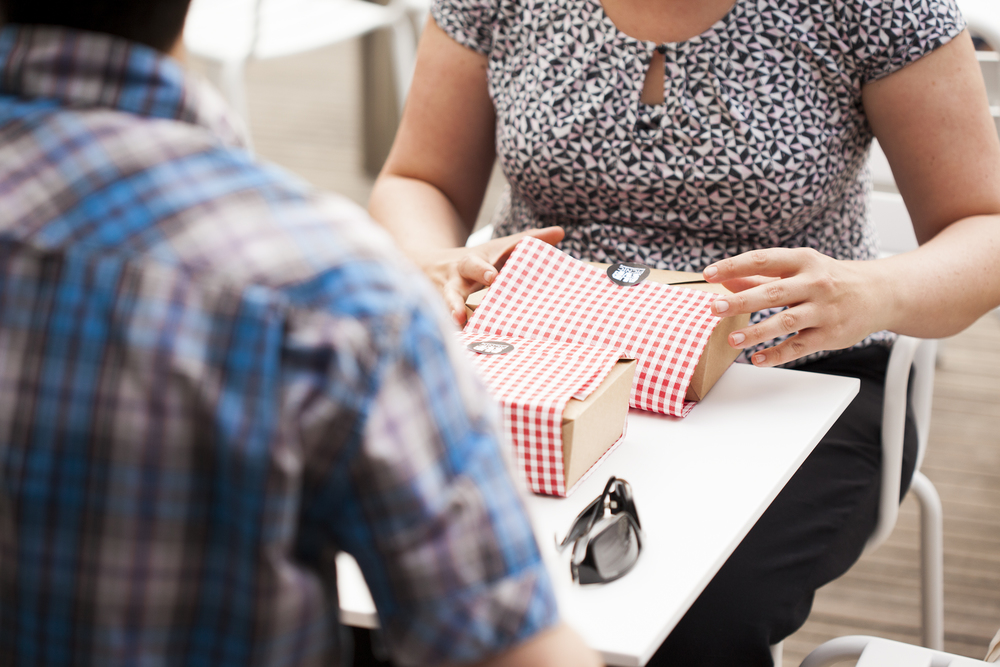 How come you’re collaborating with Beursschouwburg?

After having spent three and a half years in our tiny but beautiful restaurant AUB-SVP, we needed a bit of extra breathing space to continue our story during the hot summer days. Through Breg Horemans of TAAT-project, working on the crossing between architecture and theatre, I discovered Beursschouwburg’s amazing rooftop terrace. I immediately contacted the director, Tom Bonte, to discuss the idea, and together we mapped out what could be a logical connection between a venue for performing arts and organic and local food. We concluded that this venue is a meeting place, where people come together to enjoy culture, rather than staying at home and watching it on Youtube. Food also brings people together, so there was the connection..

How exactly are you making use of the Beursschouwburg building?

There’s of course the rooftop terrace, which is somewhat of widely spread secret, a lot of people know about it. But we also wanted to attract random passersby. I was wandering around in the building and noticed the emergency exit that just miraculously opens out to the St. Gery area. An opportunity we couldn’t ignore, so we used it to install our counter, create a second entry to the Beursschouwburg and set up some tables for people who want to have a quick bite. 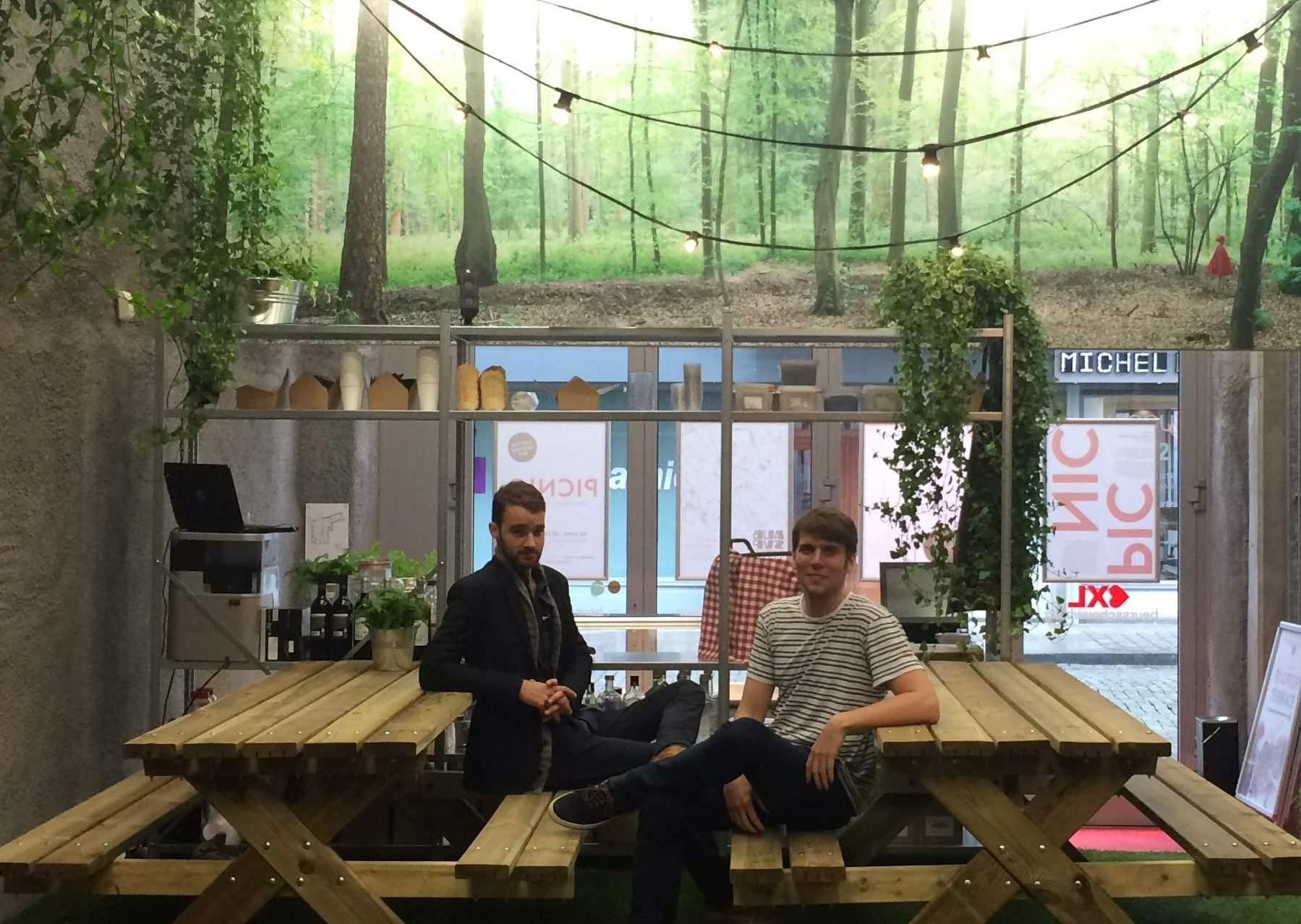 How are you working your way around the events at Beursschouwburg?

Naturally, we’re taking into account all the interesting events happening there and even try to integrate them into our menu. When Belgium played against Italy last week for example, we served wraps with a special Red Devil sauce. During the Out Loud! concerts, screenings and performances, we offer cocktails and healthy snacks. AUB-SVP is quite famous for its dips by the way! When Beursschouwburg closes for the summer after the Out Loud! festival (July 10th), we will also take a three-week break. But beginning of August we will open or picnic spot downstairs again!

Why picnicking? What is it that you like about it so much?

A while ago I discovered this activist group in Tokyo, which is fighting for more public space. Their tagline “Sharing public space” later became our hashtag. We shouldn’t underestimate how human relationships are triggered and initiated in urban public spaces. Public spaces are also behind the origin of picnicking: when the Royal parks opened their doors to the people after the French Revolution it all started. So in the city of Brussels, where we have a somewhat problematised pedestrian area and not that much green space, I think it’s important to promote what’s there and encourage people to make use of it. Picnicking can be a key to make this work. 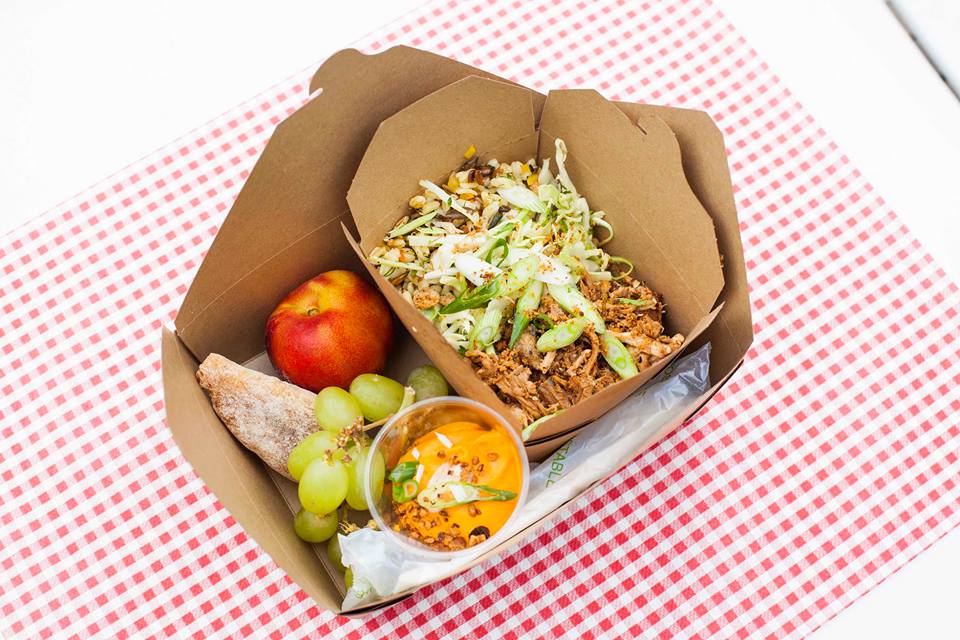 Let’s talk food. What are you offering?

We’re staying true to our AUB-SVP philosophy and work with the same chef as always, Mathias Dircx. This means local and organic products, a lead role for vegetables and going with the seasons. To ensure an authentic story, we work with products that make sense for this city, meaning we support local projects such as Brasserie de la Senne instead of selling the big beer brands. The menu will change over the course of the summer, but we always offer a meat, a fish, and a vegetarian option. Sensitivity to food waste is also important to us, so we use less popular pieces of meat or more unknown fish types that don’t easily sell on the market. For today’s dish for example, it’s pork shoulder.

It’s one that Tom Bonte made me discover! There’s this old nursing home called Pacheco Institute near Place St. Catherine. It looks like there’s nothing there, but you can actually just walk in and enjoy their inner courtyard: a lush green and quiet garden, right in the middle of the city. Perfect for enjoying our rhubarb juice and a pulled pork salad!