With the country locked down for the second time this year and everything from galleries to concert venues closed once more, we asked a number of cultural figures what to read, watch and listen to from home in these art-starved times.

Soumaya Phéline Abouda, known for her eclectic and versatile DJ sets vastly varying in tempos, styles, and feelings, has been active in the Brussels music scene for about 17 years now. She’s performed at Brussels’ Beursschouwburg, Berlin’s Tresor, and many others, and founded party series High Needs Low and Club Détour. You can listen to her show Soumaya Phéline & Les Copains one Saturday a month on Kiosk Radio. 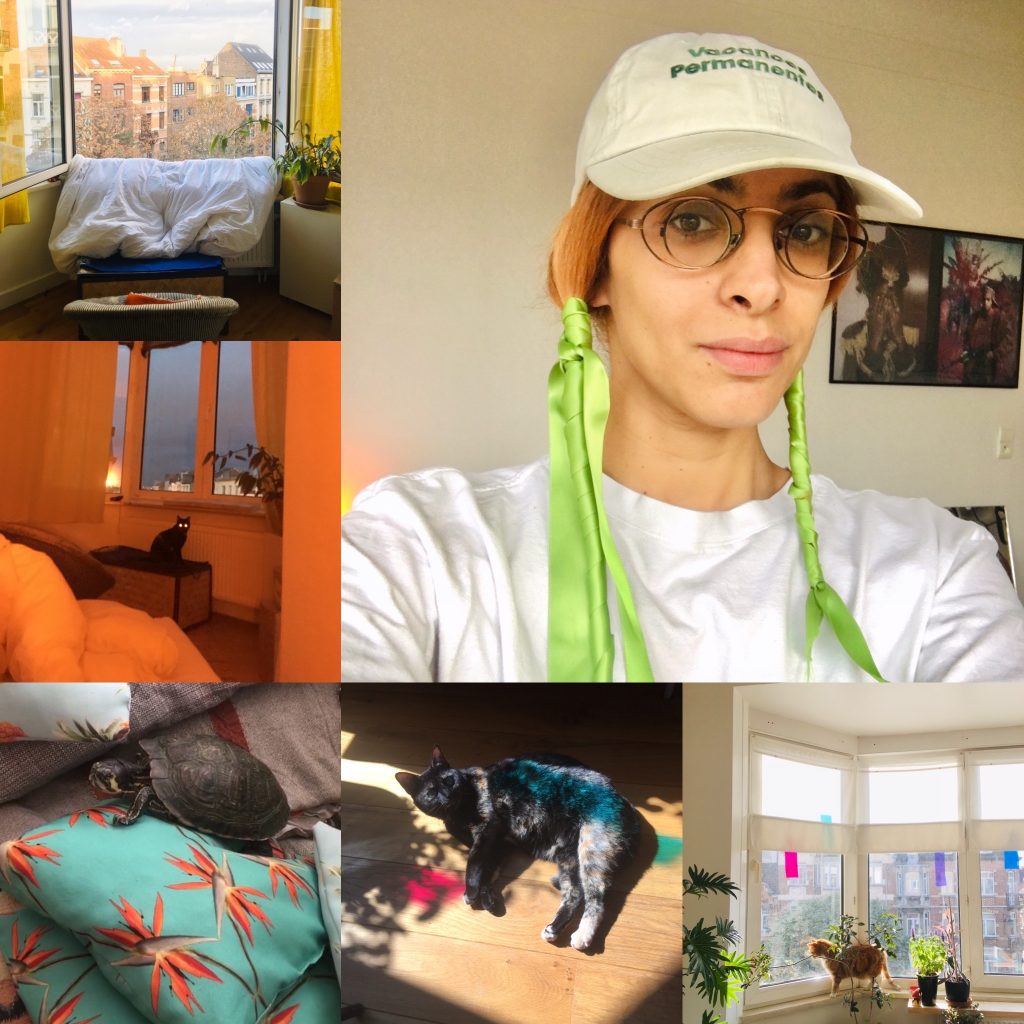 This second lockdown she’s spending in her apartment in Brussels Forest together with cats Melvin and Shabba and her turtle, Jason Waterfalls. “During the first lockdown, I was in a relationship and went through a breakup. Great atmosphere, as you can imagine! Now I take real pleasure in living alone again. The setup of my wonderfully sunny new apartment is made for a second lockdown. Working, idleness and pleasure are the three watchwords.”

As a die-hard board game fan I loved The Queen’s Gambit, which is available on Netflix. It’s stunning! It’s an adaptation of the novel of the same name by Walter Tevis, published in 1983. The story revolves around a young woman prodigy who breaks all rules and norms in the world of chess, a macho and at times rough environment. It also made me discover certain chess techniques I didn’t know before. Plus, there are references to renowned chess players. Many put themselves in “second states” involving loneliness, alcohol, or drugs to overcome the spirit of the game. Chess is a game as complex as fascinating, exactly like this series. And the actress is just breathtaking. 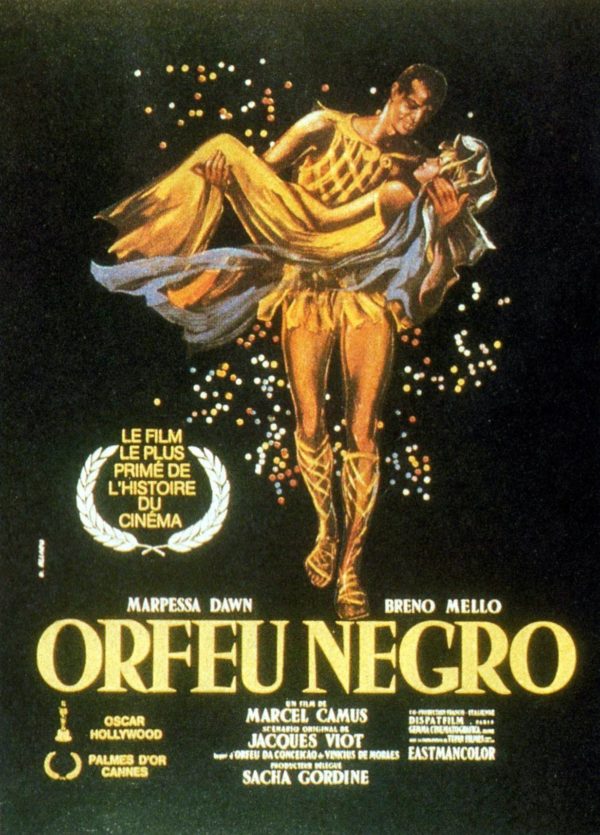 One of my favorite movies of all time is Orfeu Negro (Black Orpheus), because it’s about mythology, love, celebration, dance, music and death. As I feel the need to dance at home and it’s the only movie I have on my laptop, I watched it the first day of lockdown. It was directed by Marcel Camus, in 1959. I will definitely make a habit out of watching dance movies during quarantine.

I also suggest watching one tutorial per day, of something that you would like to craft, know about, build, draw, cook… I find it quite rewarding. There is so much out there on the internet and people are not taking enough advantage of it. Personally, I like to watch nerdy videos about coding, like this one, for example.

As we all need lightness and to let go, I also want to share my recipe with you to laugh and feel surrounded: I really like to voice dub animals, a bit of a passion of mine! It sounds dumb but it’s so funny. It allows me to have an interaction with my animals during the lockdown (and at all other times too). A few years ago I discovered the Maestro of animal dubbing: Parole de chat. I can spend hours watching his videos. I love this one and this one and especially this one (although I recommend to watch them all):

Jouissance club maps out pleasure. It teaches us techniques of solitary or two-person sexual pleasure. The drawings and captions are breathtakingly soft.

Au-delà de la pénétration is a book questioning the role of penetration in relationships between men and women or between whomever, and puts an emphasis on the reciprocal exploration of the rest of the body and an imaginative sexuality and its practices…A powerful and joyful manifesto on gender relations.

Ces hommes qui m’expliquent la vie is a book about feminism and gender inequalities today. Its starting point is an anecdote: An evening during which a white patriarch explains to the author her own book, without hearing that she is the one who has written it. Rebecca Solnit allows the reader to see certain structural mechanisms of male domination more clearly, such as potential systematic discreditation women have to face when speaking out against sexism. 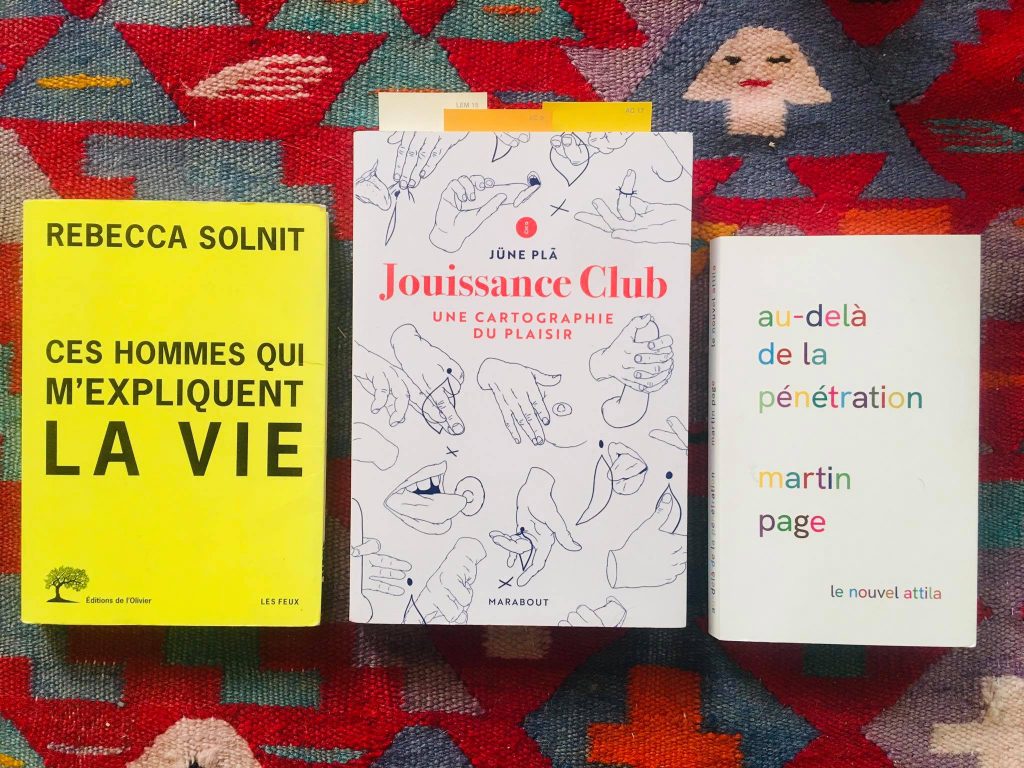 LSD, short for La Série Documentaire, is a documentary series in the form of podcasts. Each topic is explored in-depth, unfolding over four episodes. They tackle a new subject each week, and the episodes work autonomously as well as complementary. Two episodes I recommend are “Working with animals” and “Archeology of the clitoris”.

In terms of music podcasts, there are so many shows worth listening to. You just have to find what you like. The best platform to discover and support new artists and do some online crate-digging is definitely Bandcamp.

In the morning, I listen to classical radio Musiq3 or Klara, or Mica Levi, Sun Araw and Oneohtrix Point Never, my classics trio. If I listen to music during the day it’s usually Dean Blunt, which has a meditative effect on me. But normally I don’t, and am focused on work. For sleeping, Ssaliva’s unplugged vol.01, released on the JJ Funhouse label in 2018, is my one & only. It never fails to move me. Simple guitar notes are placed with precision as well as carelessness. Everyone should have this album next to their bed, like a great bedside book that you never get tired listening to. Listening to this album puts a lot of things in perspective.

I really urge people to buy artists’ music on Bandcamp – this year has been extremely difficult for musical artists with all gigs and events cancelled and they/we can really use our/your support.

I play Scrabble online. I even bought the app, yes! Or I call some friends and we play Burger Quiz on Zoom, a board game based on a French TV show produced by Alain Chabat, completely satirical and extremely funny!

I put colored gelatin paper on my windows, and I enjoy watching the sunrays wandering through my apartment throughout the day, changing the look of my interior and bathing it in color. And then there are the flickering reflections of the water in my turtle’s aquarium on the wall. The pleasure of simple things! 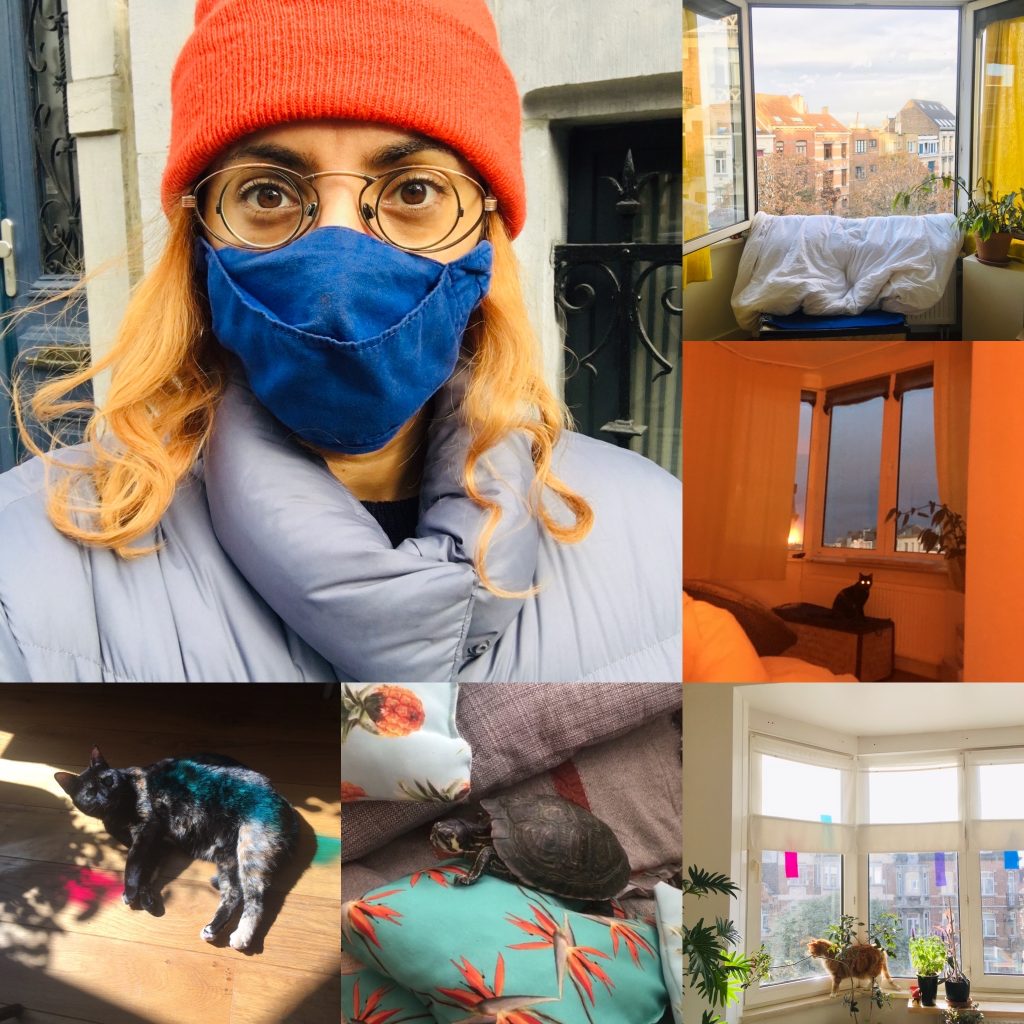