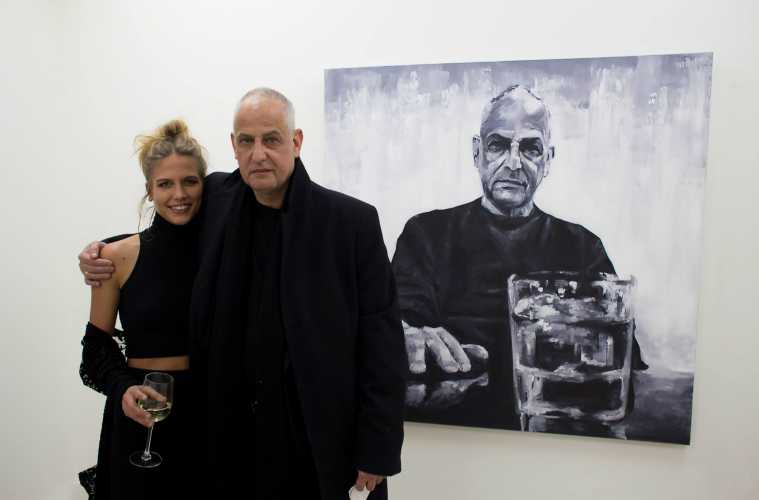 Belgian-born Charlotte De Cock feels at home on many playgrounds, from DJing to event organization. But her true passion is painting, something the creative multitalent has just proven with her most recent project, “The Thirteen Masters”, a portrait series putting forward 13 Belgian artists who all have one thing in common: they call Antwerp their home. The list truly reads like the who-is-who of Antwerp’s creative scene: Deus frontman Tom Barman, painting legend Luc Tuymans, film director Robbe De Hert, writer Jeroen Olyslaegers,…We were intrigued, and had a little chat with Charlotte (in Antwerp, of course) to find out more about it all.

How did the idea for the project come about?

Originally I wanted to do a series about Antwerp’s bar culture. It used to be so vivid and alive and it’s something this city is really known for. Now it’s slowly dying out and I wanted to make an ode to it in a way, to these legendary Brown Cafés and the people who hang out in them. I started with Luc Tuymans and Fred, and then the whole thing turned into something else. In the end it’s a tribute to 13 outstanding artists from Antwerp.

Did you painted all of them in bars then?

No. I took photos of them in the bars and then used this as a starting point for the paintings. Others I photographed at home. And I let them choose where. Mostly I just said, I’ll pass by where you are right now, which made it all very natural.

There are quite some superstars amongst the people you painted. Was it difficult at all to make them participate in your project?

It was rather easy, surprisingly. I didn’t really have to do any convincing. As we are all from Antwerp, some of them had heard of me before, which might have helped.

What’s your relationship to the pictured artists?

It’s people I admire a lot. Some I knew very well and have been following their work for years, others I actually got introduced to by some of the subjects themselves. I didn’t really know Wim for example, and I’m very happy I got to discover his work. How did you get into painting in the first place?

I’ve been making drawings my whole life, already when I was very little. At one point, when I was still in school, I started to paint. My teachers didn’t really like what I was doing, but when my mom put some of my paintings in her clothing shop, they actually sold, and I decided to quit school.

So you are completely self-taught?

Yes. I didn’t study art or read books about how to paint, I just did it. The more you paint, the better you get.

How does it feel to paint a painting legend like Luc Tuymans? You weren’t blocked by admiration?

I have to admit I was pretty scared. A portrait is something very difficult because you have to add character and personality, not just make it look like a certain person. Plus, you never know how they will react when they see the result. It’s quite intimidating when you know you’ll get judged by a painting superstar. But I didn’t get any negative feedback, so I guess everything turned alright!

What was the most challenging aspect of the whole project?

The project was a big challenge as such. I think I took it on because I need to feel challenged all the time. These are people who make you nervous and who make you push yourself. There were definitely times when I felt stuck. I had a very difficult moment with Tom’s picture, so much that at one point I painted a shotgun next to his head. I was also fighting with Jeroen’s portrait for a while, which I actually destroyed just four days before the show and I had to completely start over. I think it was because he has a very kind and sweet face and that was something I found more difficult to capture. You said earlier that you want to bring out their individual personalities. How do you do that?

You have to find that one outstanding feature that characterizes a person and exaggerate it without ridiculing it. You have to think about what makes someone who they are. Koen was tricky to paint because his face has no depth, everything is light. I work a lot with shades, and there weren’t many on his face, which was very difficult.

How close are the paintings to the photographs?

Quite close. While painting the portraits I would display the respective photographs on my computer. Many artists hold a picture in their hand while they paint, but I prefer to have it on my screen.

Charlotte De Cock is a multidisciplinary creative based in Antwerp.