Thirtysomething Abigail DeVille was born and raised in New York, where she still lives and works today. The city and its history have been playing a pivotal role in her work, which is almost always site-specific while trying to shine a light on marginalized people and places. “Over the last seven years, I made about 100 installations in different places”, she says. “Most of them are trashed by now, but sometimes I  reconfigure them into a sculpture, and some elements become part of the vocabulary I’m using.” When Abigail came to Brussels earlier this year, she, as always, dived into the history of the location, laying bare a part of Belgian history that is not often talked about. We had a chat with the socially and politically engaged artist about her exhibition “Chaos or Community?” at Brussels gallery Michel Rein, dealing with opposition to her art, and much more.

I was impressed to learn that you thought up and mounted your exhibition in only ten days. Plus, you mostly work site-specifically – sounds like quite a challenge for a gallery show in Brussels!

Gallery exhibitions, which are commercial spaces, are always challenging. It’s not really a context for excavation and thinking about the layered histories of a site. Originally I had the idea to make works based on the book of Martin Luther King from 1967: “Where do we go from here: Chaos or community?”. But then I stumbled upon the history of Leopold II, and I was flabbergasted. About 10 million people were killed during his reign! I was really shocked because it’s not really talked about. I don’t understand why. I’m wondering if it’s an abstraction for the collective consciousness of the country because it all happened far away in Congo. It’s not like there were slave markets in Belgium. 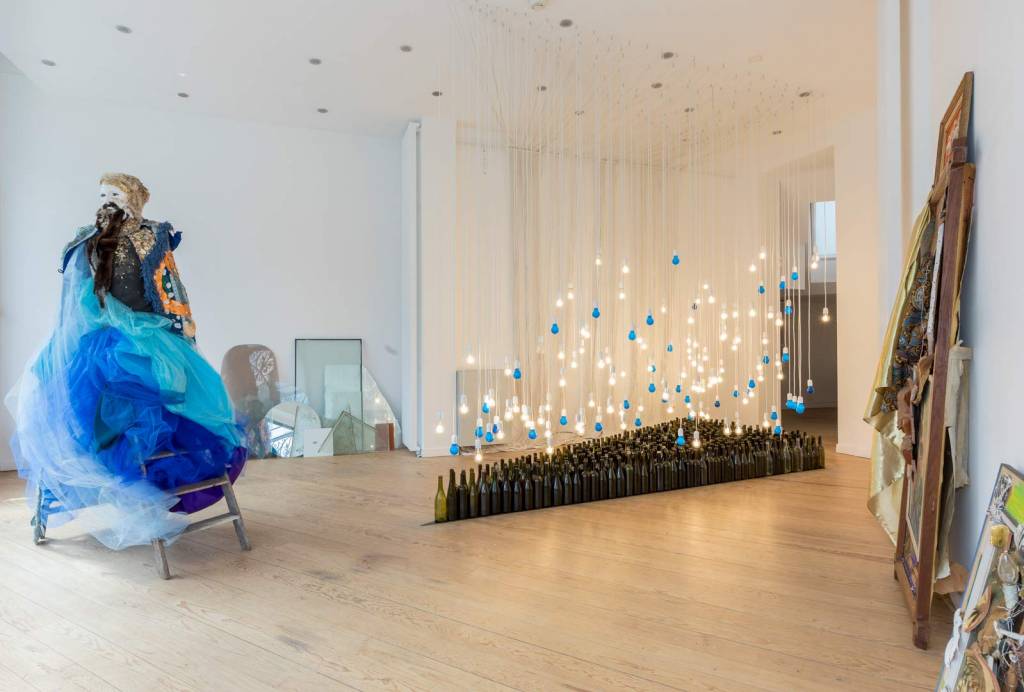 How did you come across it?

People asked me before I came here: What are you going to do over there? But I didn’t really know much about Belgium. A friend of mine, a curator, showed me a catalog from the last Biennale, where a show responded to this issue. That’s when the wheels started turning. And I also had heard my dad yelling about it recently, who’s a bit of a history nut. I think he learned about it sometime last year. There were little nuggets here and there and when I got here I started investigating.

How did you translate it all into your show?

The sculpture with the bottles and the lights is called .0001%. I wanted to have 1000 things to show that .0001 is 1000 of 10 million: a visual representation of the numbers, which are pretty much incomprehensible. It’s also embedded with meaning that comes from West Africa. There are a lot of seashells in the things I made. I got them here in Belgium, but it refers to a tradition from Congo, where they put seashells on the graves of the dead. There are also references to the understanding that African Americans have of their culture and identity through the slave trade, which is why there’s so much blue in the exhibition. That’s why the sculpture I made of Leopold II is also covered in water. I named it after the bronze statue of him on a horse in Brussels. It’s the statue that a performance artist painted in red back in 2008. I saw this amazing video about it on Youtube. In the end, he gets arrested and rants about how Leopold wasn’t a hero but a criminal and a murderer. I also read that in 2015 there was a celebration planned for the anniversary of his coronation but people got upset and it was canceled. Crazy. That was only two years ago!

Where did you get all the found objects you used in your works?

Mainly at the flea market at Place du Jeu de Balle. It’s great. I went there a couple of times. And then there’s a second-hand shop a few blocks away from here where I got the rest of the stuff. 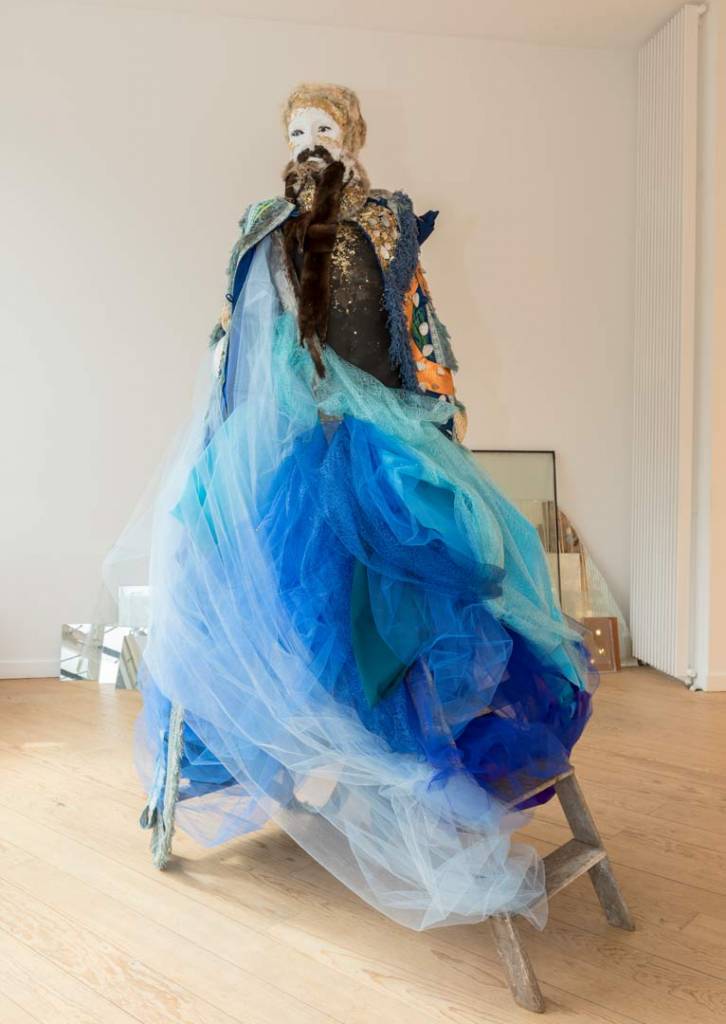 Was it always clear to you that if you made art it should have a political or social component?

I think from the time that I was eight or nine years old, history was my favorite subject. I’m interested in things that get lost as time progresses and things move on.

How did you know you wanted to become an artist?

Already in kindergarten I always wanted to go to the art center where I felt at ease. I think I knew what I wanted to do pretty early. That’s why I went to an art high school. When I was in undergrad there was this moment where I got lost in making something, and I just got so much joy from it. I forgot where I was and time stood still and in that moment I realized this is what I wanted to do. There was never anything else.

Do you have any advice for young artists who are just starting out?

Make the best possible work you can make and take opportunities as they come. I’ve shown a lot in institutions for very little money, but it helped grow my reputation and built up momentum. Things will come to you if you work hard. You got to be rigorous in what you do. 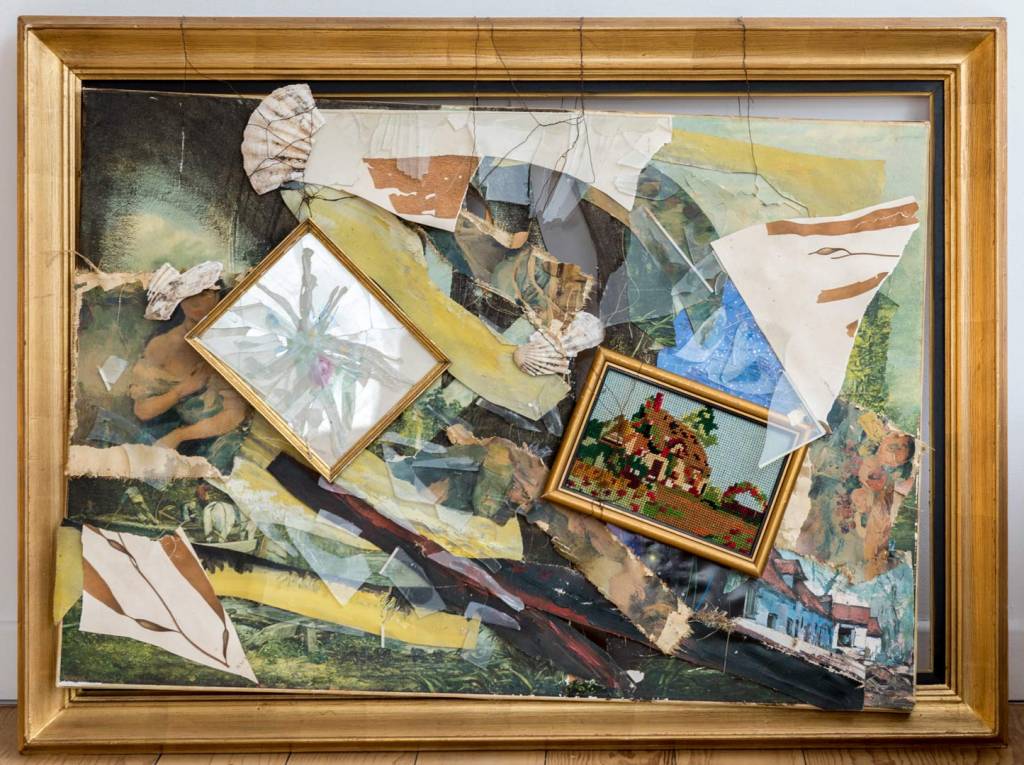 You work a lot with marginalization, and race repeatedly plays a role in your work. What’s your take on the recent heated discussion surrounding Dana Schutz’s “Open Casket” painting at Whitney Biennal? (The painting replicates a photo of the corpse of Emmett Till, an African-American boy who was murdered in Mississippi in 1955 after he had been falsely accused of flirting with a white woman. Some find that “it is not acceptable for a white person to transmute Black suffering into profit and fun”, as it says in an open letter signed by over 30 people.)

Oh Lord (laughs). This photo of Emmett is so historically significant and has all this weight and power, which is completely devoid in the painting. I’m giving her the benefit of the doubt and think that it was coming from a really earnest and sincere place, but even if she’s trying to process through her feelings on continuous racial discrimination…I think she was being lazy in her thinking, in how she approached the subject. She should have thought it through more. It can’t be so simplistic. You’re stylizing this person’s death. It shouldn’t be a painting exercise but a real investigation, something that is coming from your heart. People pretty much have the right to do whatever they want, but there has to be genuine thought and clarity and intent behind it. I find it unfortunate that so much conversation got spent on that, when it was the first Whitney Biennal curated by two people of color, featuring many works by people of color.

Yes. There was a situation in Washington DC a couple of years ago. It was the first public art project I did. There was a lot of opposition and it was all taken down a month early. 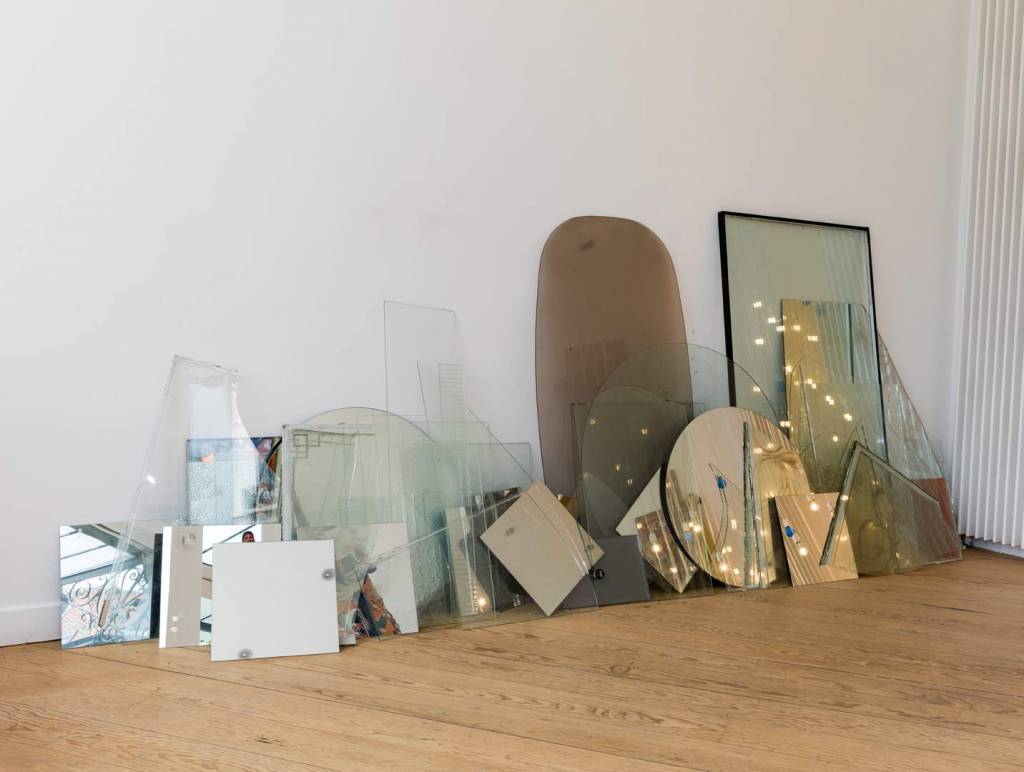 I participated in a project called “5 by 5” by the DC arts commission. Five curators each picked five artists to do site-specific works. They took us around DC on a bus proposing different sites and we saw a lot of places that were recently leveled, with these glass structures on top of it, and it made me wonder where the actual communities are that clearly had been redeveloped out. I was intrigued by a neighborhood in the South East, a black and economically depressed area, one of the first that got national historic preservation status. There are all these old houses but you aren’t allowed to knock them down. So the government has quietly been buying all these properties and lets the houses fall beyond repair. I saw houses that were sliding and crumbling. They just want them to fall apart so that they can redevelop. There were a lot of buildings with empty storefronts, and I got the idea to do something in there based on a series on the Great Migration by African American artist Jacob Lawrence. From the 1940s to the 1970s African-Americans were moving from the South to the North and West, looking for economic opportunities and creating their own communities. I took a 10-day road trip down South to collect all the material.

The local community didn’t understand why someone came here and put all this “trash” in these spaces. Some actually thought the ceiling had fallen in. The real issue was that people were upset because these storefronts hadn’t been accessible to them for ten years, but I got access. They wanted to open businesses in there, which I totally understand. But I didn’t know all that. It didn’t help that the art commission had done no community outreach at all. I kept asking about it. I was naïve and thought I’ll just go down there for a month, and meet people and talk to community members. I had this New York frame of mind to get things done. I called, churches, everything, but no one wanted to talk to me because I wasn’t from there. The organization kept rerouting me to the developers. It was a terrible combination of things and it exploded.

Did they protest in front of your installations?

No, they shut it down by making phone calls. They kept calling their councilman and representatives who then made the fire department take it all down. 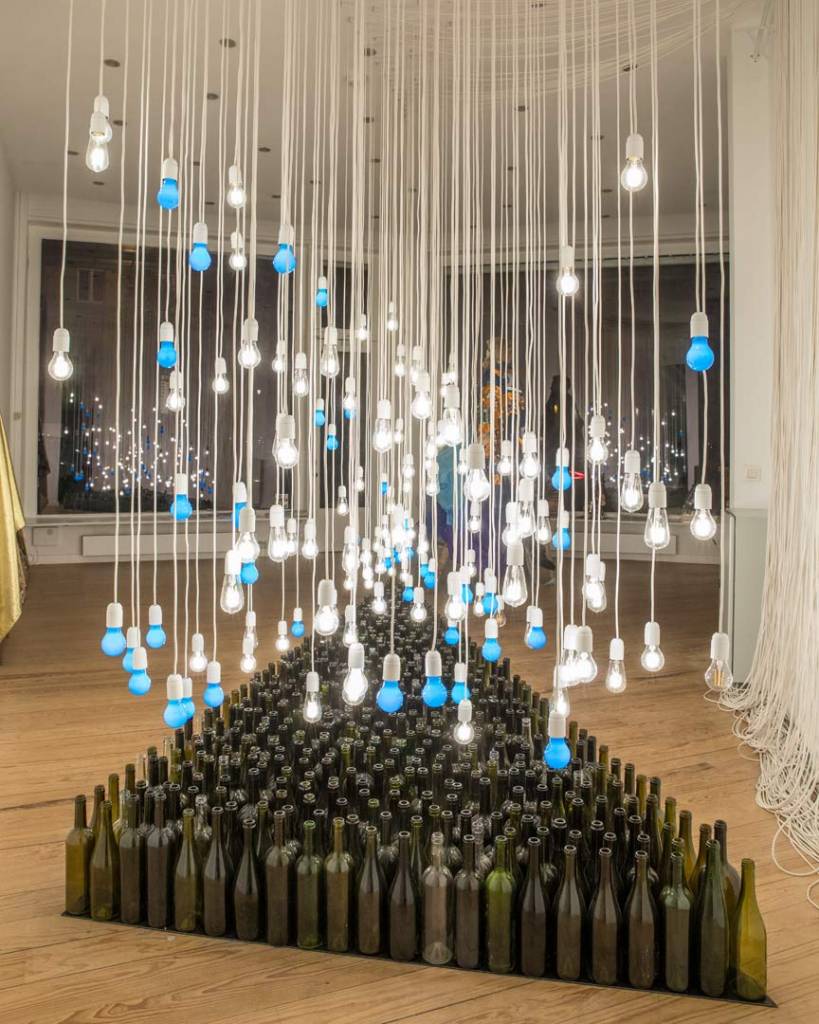 It’s hard to sell a site-specific work. Is this something you think about?

I haven’t thought about it much, but I’m starting to ask myself what I could make that is more lasting. The sculptures here can be bought. I think it’s one of the first times that it’s something site-specifically made that’s actually sellable. The last show I did with Michel Rein in Paris was a mess in this sense: it covered two rooms but nothing was sellable (laughs).

You live and work in New York. What kind of place is that for an artist?

I think New York is very hard. It’s difficult for people to come without any kind of contacts to become an artist. It costs so much to just maintain to be there. And then to find the time and space to actually be able to make work is challenging. I’m from New York, I had advantages, I could live at my grandmother’s apartment. On the other hand, you can make a lot happen there in a very short period of time. You go to an opening and get drunk with someone and maybe you’ll be in a museum show at the end of the conversation. There are casual opportunities all over the place.