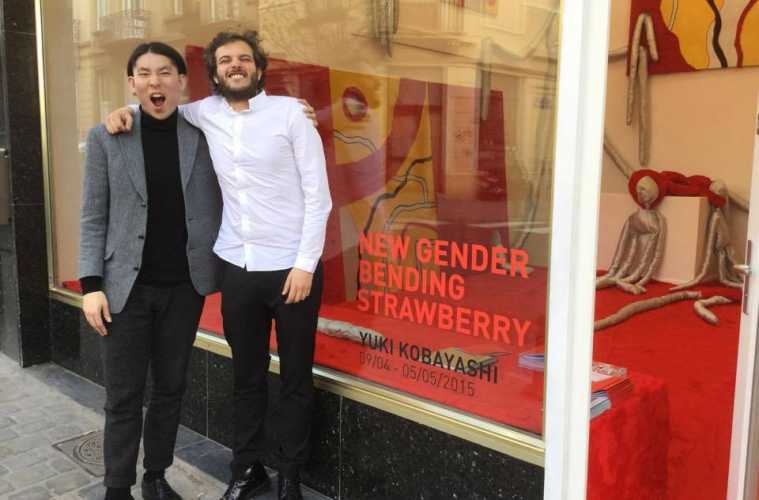 A little while ago French-born Chabah Yelmani (27) took the leap to quit his job as a gallery assistant in Paris in order to move to Brussels and launch his own project, the Chabah Yelmani Gallery. Since its opening last January, we’ve been impressed with the fantastic selection of shows, which especially champion fresh, emerging artists from all over. On view at the moment: South Korean Yumi Chung, whose vibrant, captivating paintings and drawings are strongly inspired by her time in Iceland, exploring the language of space and reflecting on her walks through Reykjavik. We wanted to meet the creative mind behind this welcome addition to Belgium’s art scene, and had a little chat with Chabah about the whole adventure, what makes good art and why he chose Brussels over Paris.

I grew up in a tough neighborhood in the region of Rouen in France, where access to museums or anything art-related was quite limited. So I read as many books as possible. I remember this key moment, when I was 8 years old, and stumbled upon a bronze replica of the “Capitoline Wolf”. This is the piece that made me fall for art. For my 8 year old eyes it was the most exciting thing ever. I later studied art history in Paris and over the years I worked in various sectors of the art world to get a real understanding of all the different actors within the art market. I don’t think it is possible to work in this field if you don’t have a profound passion and curiosity for art. For me art is a kind of therapeutic practice, a bit like a religion.

The main goal is to showcase young, upcoming artists who have already reached a sense of maturity and ensure the longevity of their work. At the same time we want to make room for artists who were left out of the institutional memory and haven’t been getting the retrospectives they might deserve. I’m very inspired by what Gallery Loevenbruck did for the Polish artist Alina Szapocznikow: their gallery show was the catalyst for exhibitions of her work at the Museum of Modern Art of Warsaw, Wiels, Tate, MoMA and Centre Pompidou. I think it’s becoming more and more important for galleries to work hand in hand with institutions and private foundations. Why did you choose Brussels?

The Belgian art market is very interesting, among other things because of its strong collecting history. Also, it’s much more open than in Paris for example. In Brussels it is much easier to create something and be part of the growth of the city. In Paris it is almost impossible to start an art space when you are young and have limited funds. The rent there is just too high in my opinion and keeps young galleries from opening. Plus, the market in Paris feels quite saturated and dominated by a few big galleries such as Perrotin, Mennour, Karsten Greve and Ropac. I feel the atmosphere in Brussels is really culturally stimulating at the moment, there’s a great dynamic. It is for a reason that the city has attracted so many international galleries as for instance Gladstone, Nathalie Obadia, Almine Rech or Daniel Templon.

What made you want to open up your very own gallery in the first place?

I’ve been dreaming of opening up my own gallery since my first internship at Univers du Bronze gallery in Paris. After eight year of experience in the art world, I finally took the leap. Certain life events, such as the birth of my daughter, Iman, gave me the courage to finally make that step, stop thinking too much and go with my guts. Since then, my motto has been to forget about the fear of possible failure and act without any regrets. How do you “find” artists to work with and how to you select them?

I’ve discovered most of my artists in London actually. I always visit the CSM and Goldsmiths graduation shows, which are great hubs for emerging talents. But for Emilie Benoist, Caspar Berger and a few others the story was different. I generally select my artists based on personal tastes and affinities, combined with a number of other criteria: the work needs to surprise me, create an emotion, and reveal matter and content that will outlast current trends and have a place in art history. The commercial aspect is secondary.

Is there an artist you’re dreaming of representing? An art fair you dream of participating in?

There are so many! If I had to pick, it would be Sadamasa Motonaga who unfortunately passed away in 2011. I would love to show a retrospective of her work in the near future. I just came back from Art Basel, and it would be a dream come true to have my own booth there one day. For now I’d really like to participate in Art Brussels, and of course I wouldn’t say no to a tiny little stand at FIAC!